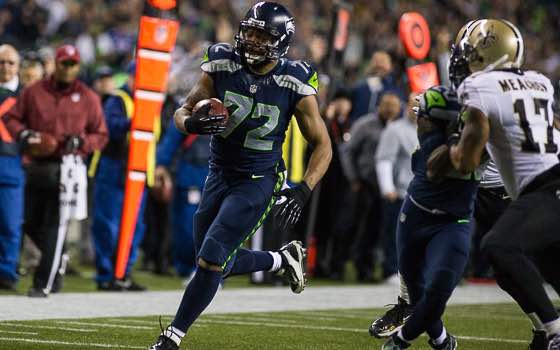 Not even the 2013 Super Bowl champion Seahawks had a more dominating defensive run than this year's Seahawks have put together in the past three weeks.

In their past three games, the Seahawks have rolled over the Arizona Cardinals (19-3), San Francisco 49ers (19-3) and Philadelphia Eagles (24-14) in such remarkably easy fashion that an NFC West title, seemingly an impossibility less than a month ago, is now within their reach. So, for that matter, is another trip to the Super Bowl if they can sustain their almost surreal level of performance.

In their past three, the Seahawks have allowed 204, 164 and 139 yards, respectively, an average of 6.7 points and 169 yards against three playoff contenders, including two on the road. Those are 1985 Chicago Bears / 2000 Baltimore Ravens numbers, and you can look it up.

Even the 2013 Seahawks, now lumped among the great defenses of the Super Bowl era, never had a three-game run like the current one. Consider this number: The Eagles entered as the league's No. 4 offense and the Seahawks -- on the road -- held them to a brutal 2-for-11 on third downs. Or this one: 10 Seahawks caught passes and 20 made tackles.

FOX analyst Troy Aikman put the exclamation point on Sunday's burst of defensive brilliance as the Seahawks neared the end of one of the great efforts in franchise history.

"The Seattle defense, they're completely overwhelming. They've given up one play -- that touchdown to (Zach) Ertz," Aikman said. "In the past three wins over Arizona, San Francisco and Philadelphia -- by a combined 62-20 -- the Seahawks have allowed 204, 164 and 139 yards. 139 yards against a Chip Kelly offense! In Kelly's house!"

But Seattle has never shut down a division leader -- Philadelphia entered 9-3 -- in quite the manner that it did Sunday. The Seahawks allowed the Eagles only 45 plays after they entered averaging 73. Last year, the Seahawks limited opponents to 50 plays twice, in the season opener at Carolina and in the season ender vs. St. Louis.

Since Pete Carroll re-entered the NFL in 2010, only one team has allowed an opponent fewer than the 139 Seattle permitted Philadelphia. On Sept. 16, 2012, Houston yielded 117 to Jacksonville, but the Jaguars were en route to a 2-14 season. Even after their blowout -- statistically, if not on the scoreboard -- loss Sunday, Philadelphia still holds the NFC's No. 3 seed. The following are the lowest single-game yardage totals allowed over the past four years. Note that the Seahawks are the only franchise to make the list in back-to-back weeks.

The usually pugnacious Philadelphia sports writers didn't further disfigure the Eagles' carcass after the game, preferring to acknowledge that the Eagles simply ran into a superior opponent. The one nit the scribes picked was that Kelly, trailing by 10 and facing fourth and 11 from his own 26 with four minutes left, opted to punt even though he had nothing to lose.

"It was a stunning concession," Mike Sielsky wrote in the Inquirer, "a white flag that ran counter to Kelly's swashbuckling instincts. But in context -- in this game, against this opponent -- it was also a recognition of reality.

"The Eagles aren't at the Seahawks' level, and none of Kelly's well-crafted play calls or formations, none of his beliefs about athletes' pace and conditioning, would change a few simple truths: The Seahawks' secondary could handle the Eagles' receivers, and the Eagles' defense couldn't handle Russell Wilson. So Kelly punted and moved on to next week."

With the Eagles largely containing Marshawn Lynch, especially in the first half, Wilson contributed another assortment of big plays. He threw a pair of touchdown passes, including a 23-yarder to Doug Baldwin, and ran for 48 yards, including a 26-yard TD.

Wilson has done a lot of crazy statistical stuff this season, including: In Week 5 at Washington, he set the Monday Night Football record for most rushing yards by a quarterback with 122. And in Week 7 at St. Louis, he became the first player in NFL history to post a 300/100 game with 313 passing yards and 106 rushing yards.

Wilson set no records against the Eagles, but only three other quarterbacks in the past decade recorded TD plays of 20 yards or longer via both passing and rushing in the same game:

With Wilson clicking off 7.2 yards per rush, the Seahawks are averaging 5.2 per rushing attempt. If they keep up that pace, they will become the first team in franchise history to average more than 5.0. The 2012 Seahawks averaged 4.81 and the 2005 Super Bowl runners-up averaged 4.73.