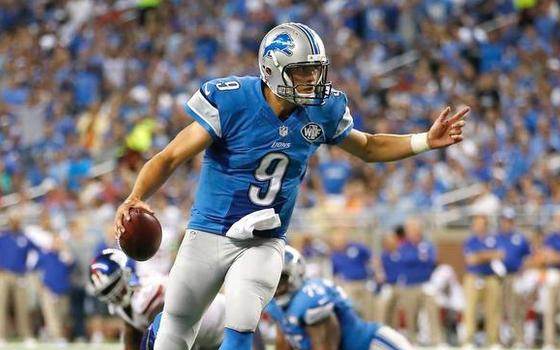 The second half of the NFL season gets underway this week and the race to the playoffs is in full swing.

Week 10 starts on Thursday night (8:25 PM ET, NFL Network) when the Cleveland Browns visit the Cincinnati Bengals. It will conclude on Monday night (8:30 PM ET, ESPN) when the Philadelphia Eagles host the Carolina Panthers. The NFL also returns to London as the Dallas Cowboys take on the Jacksonville Jaguars in the third and final installment of the league's 2014 International Series at Wembley Stadium.

"It feels good," says Arizona wide receiver LARRY FITZGERALD of the team's 7-1 start. "But it's just the beginning of our season. We've got the stretch run now. You don't get anything for a 7-1 start. We're just halfway through the season. It's all about the marathon."

Halfway through the season, almost nothing is clear. There's still plenty of football left to be played and a lot can happen. So don't count anyone out.

In every season since 1987, at least one team with a .500 or worse record through eight games has advanced to the postseason. Last year, two such teams -- Philadelphia (3-5) and San Diego (4-4) -- accomplished the feat.

Week 10 kicks off on Thursday night on NFL Network with a key AFC North match-up as Cincinnati hosts Cleveland with first place in the division on the line. Cincinnati rookie running back JEREMY HILL led the way in the Bengals' 33-23 win against Jacksonville last week, rushing for a career-high 154 yards and two touchdowns.

"A big win at home," says Hill, who became the second rookie in club history to rush for at least 150 yards and two touchdowns in a game (COREY DILLON). "It keeps us on top of the division. It's a blessing."

"Definitely expect to play," says Johnson. "It's huge to see the team go out there and win consistently and to stack up wins. That's the thing in the NFL. It just makes me look forward more and more to getting back out there with the guys."

"There aren't many shutouts," says Miami defensive coordinator KEVIN COYLE. "It's great when you get in the stadium and things start going positive and that crowd gets behind you, it really makes a difference."

The Cowboys and Jaguars will meet at London's Wembley Stadium in the last of three games to be played in the United Kingdom in 2014. The contest marks Jacksonville's second visit to London for a regular-season game in as many years, while Dallas will play its first regular-season game outside of the United States.

The Cowboys (6-3) are looking to rebound from a 28-17 loss to the Cardinals (7-1). Quarterback TONY ROMO missed the Arizona game with a back injury, but traveled with the team to London and hopes to return to the lineup. He has a 24-5 (.828) record as a starter in the month of November, the best winning percentage of any quarterback in the Super Bowl era for the month.

"Tony is certainly on a normal timetable for people who have had this injury," says Dallas head coach JASON GARRETT. "Hopefully he makes progress here in the next couple days."

The Jaguars are in the second year of a four-year commitment to play one home game each season in London and look forward to returning to Wembley.

"We enjoy it, and our players enjoy it," says Jacksonville head coach GUS BRADLEY of the London experience. "Once you experience it, it's a great atmosphere."

One of the NFL's oldest rivalries will be renewed on Sunday Night Football as the Bears travel to Green Bay to face the Packers. Both teams are coming off their bye weeks as the second half of the season begins.

The Packers have won seven of eight games after byes since head coach MIKE MC CARTHY took over in 2006 and are looking to rebound from a loss at New Orleans in Week 8.

"I know we can make progress," says Green Bay defensive coordinator DOM CAPERS. "There are parts we can do better and we will get better."

The Bears are focused on bringing home a win from their trip to Green Bay as they look forward to playing five of their final seven games at Soldier Field down the stretch.

"The team knows that the most important thing is to get ready for the Packers, and that's what we are thinking about," says Chicago head coach MARC TRESTMAN. "Our focus is the Packers and getting ready to play one more game."

Week 10 will finish with an NFC match-up featuring two teams near the top of their respective divisions as the Eagles host the Panthers.

Philadelphia moved past Dallas into first place in the NFC East with a 31-21 win at Houston. Wide receiver JEREMY MACLIN provided the offensive spark for the Eagles, finishing with 158 receiving yards and two touchdowns.

"I'm just going out there and making the most of my opportunities," says Maclin, who became the first player in franchise history to post at least 150 receiving yards and two touchdowns in consecutive games in the same season. "They're doing a good job dialing it up for me."

With seven games still to play and just one win behind first-place New Orleans, Carolina head coach RON RIVERA knows the Panthers are still in position to challenge for the NFC South title.

"We are by no means out of the race," says Rivera. "We are looking from behind a little bit, but we are still in a good situation. Anything is possible. Don't count us out."