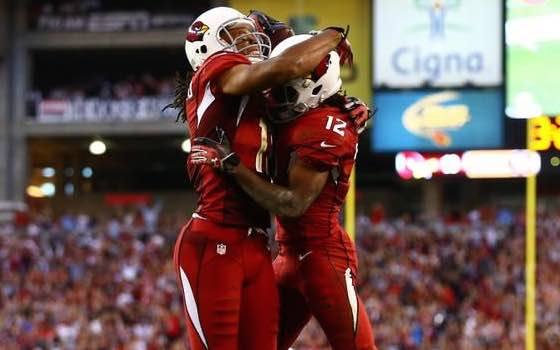 The Arizona Cardinals own the league's best record at 9-1.

It is only the second time in franchise history the Cardinals have opened a season with nine wins in their first 10 games, joining the 1948 Chicago Cardinals.

At 9-1, Arizona sits atop the NFL standings. It is the first time since the end of the 1948 regular season that the Cardinals have sole possession of the league's best record at least 10 games into a season.

"It feels great to be 9-1," says 11-year veteran Larry Fitzgerald, who last week became the second-youngest player in NFL history to reach 12,000 receiving yards. "We have a long road ahead of us, but methodically every single week we're taking care of business. That's what we set out to do."

Through the first 11 weeks of the season, the Cardinals have built a two-game lead in the race for the NFC's top seed and own a three-game lead in the division. Arizona is the only team in the league yet to lose a conference game (7-0).

"Our goal is to get in the playoffs," says Cardinals quarterback Drew Stanton, who is 3-1 this season as the team's starter. "That's been the goal from Day One. That's still our mindset. I'm going day by day. The rest of it will take care of itself if we continue to take care of business each and every week like we should."

Arizona has enjoyed success at University of Phoenix Stadium, where the team is a perfect 6-0. The Cardinals are the only team in the NFL with a 6-0 home record and one of only five teams yet to lose at home this season. This marks the first time since 1970 in which the Cardinals have won their first six home games to begin a season.

"We have to protect the nest," says wide receiver Michael Floyd, who had two touchdowns in the team's Week 11 win over Detroit, about the team's home-field advantage. "This is our home and no one can come in here and win. B.A. (Bruce Arians) says to us every single time we go out on the field that no one can come into our house and outperform us."

The Cardinals' defense, led by defensive coordinator Todd Bowles, has forced 20 turnovers this season, including 15 interceptions, the second-most in the league. Arizona has also limited turnovers on the offensive side of the ball and is tied for second in the NFL with a +11 turnover differential.

"Coach Bowles is definitely one of the smartest defensive coordinators I have ever been around," says cornerback Patrick Peterson, who is the only player in the league with at least 10 interceptions (14) and five return touchdowns (five) since 2011. "He does a great job at preparing us throughout the week and getting us in position to make plays. He puts guys in position to make plays. It's a different guy each and every week that's making that big play for us."

The 9-1 Cardinals will travel to Seattle to face the defending Super Bowl champions. Arizona is one of only two teams to defeat the Seahawks at CenturyLink Field over the past three seasons.

Quarterback DREW STANTON threw two first-quarter touchdown passes to MICHAEL FLOYD and the Cardinals' defense held the Lions out of the end zone in Arizona's 14-6 Week 11 win. Stanton is now 3-1 this season as the Cardinals' starting quarterback and Floyd is one of three players in franchise history with two first-quarter touchdown catches in a game.

"Drew's 3-1 as a starter," says Arizona head coach BRUCE ARIANS. "He's a solid player and we've got some huge challenges ahead of us. The schedule is going to get really, really tough the rest of the way in."

The Seahawks have won 21 of their past 23 games at home, including the playoffs, and quarterback RUSSELL WILSON has a 101.4 passer rating in those contests. Seattle leads the NFL in rushing, averaging 174.2 yards per game, and MARSHAWN LYNCH has a league-best nine rushing touchdowns.

"For us, we're just looking for the next opportunity," says Wilson, who will look to get his team back on track after a Week 11 loss at Kansas City. "We have to have that high confidence we normally have and continue to have that swagger that we always play with."