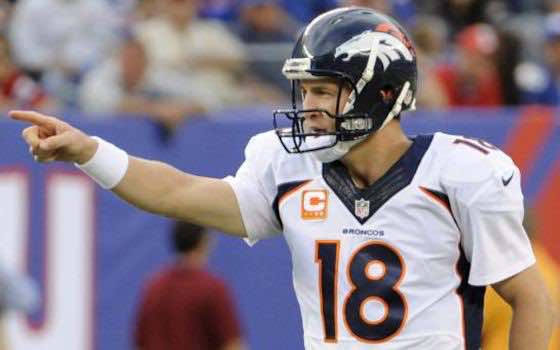 The NFL quarterbacks with the most consecutive games with at least one touchdown pass:

Tight ends Rob Gronkowski of the New England Patriots and Antonio Gates of the San Diego Chargers are both on the verge of a significant milestone.

The tight ends with the most seasons with at least 10 touchdown receptions in NFL history:

With eight receptions in Week 12 at Seattle, Fitzgerald, who will be 31 years, 84 days old on Sunday, would become the youngest player to reach 900 career receptions in NFL history.

The youngest players ever to reach 900 career receptions:

Tampa Bay rookie wide receiver Mike Evans caught seven passes for 209 yards and two touchdowns in the Buccaneers' 27-7 victory at Washington in Week 11. The performance marked Evans' third consecutive game with 120 or more receiving yards, joining Billy Howton (1952), Jimmy Orr (1958) and Marques Colston (2006) as the only rookies to do it.

With 120 or more receiving yards at Chicago on Sunday, Evans would become the first rookie in NFL history to accomplish the feat in four consecutive games.

Buffalo running back Fred Jackson has rushed for 5,370 yards in his 8-year career.

Jackson, who went undrafted out of Coe College in 2007, needs nine rushing yards on Sunday against the New York Jets to surpass WILLIE PARKER (5,378) for the third-most rushing yards all-time by an undrafted player.

The undrafted players with the most career rushing yards:

Indianapolis Colts kicker Adam Vinatieri has made 470 field goals in his 19-year career. With two field goals on Sunday against Jacksonville, Vinatieri would move past MATT STOVER for the fifth-most in NFL history.

The NFL kickers with the most field goals in NFL history:

Houston punter Shane Lechler has placed 371 career punts inside the 20-yard line. With three such punts on Sunday against Cincinnati, Lechler would surpass MATT TURK (373) for the fifth-most punts inside the 20 since the statistic became official in 1976.

The NFL punters with the most punts inside the 20 yard line since 1976: