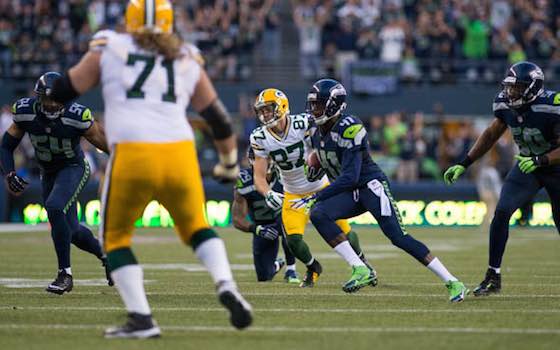 The Seahawks beat Green Bay 36-16 in the regular season opener. Among the differences then: WR Percy Harvin led Seattle in receiving, and Packers QB Rodgers was healthy.

Led by a hobbling but still effective QB Aaron Rodgers, the Green Bay Packers rallied in the second half to defeat the Dallas Cowboys 26-21 Sunday at Lambeau Field, earning the right to face the Seahawks next Sunday at CenturyLink Field for the NFC championship. The winner will advance to Super Bowl XLIX Feb. 1 in Glendale, AZ.

Dallas looked like an almost-certain winner inside the final five minutes when QB Tony Romo hit WR Dez Bryant for 31 yards on fourth-and two at the Green Bay one-yard line. But officials, following a challenge, reversed the ruling, declaring that Bryant didn't control the ball throughout the process. Green Bay took over and ran out the clock.

Rodgers, the likely MVP this season, threw for 316 yards and three touchdowns -- he completed all nine throws in the fourth quarter -- while severely constricted with a torn calf muscle sustained two weeks earlier. He said after Sunday's game that the injury will affect his mobility in Seattle, where Seahawks opened the 2014 season Sept. 4 against Green Bay with a 36-16 victory.

"I'll do everything I can this week to get ready to go up to Seattle and play a great team," Rodgers told FOX.

The Seahawks launched defense of their NFL title with a surprisingly easily victory. With the score 10-10 in the second quarter, the Seahawks reeled off 19 consecutive points and won going away with an array of contributors.

Russell Wilson completed 19 of 28 for 191 yards, two touchdowns and a 110.9 passer rating. He also ran for 29 yards. Marshawn Lynch ran 20 times for 110 yards and a pair of scores, and the Seahawks' defense created its usual mayhem. If not for a muffed punt by Earl Thomas in the first quarter that set up Green Bay's first touchdown, the game might have turned into a rout.

After the game, the buzz was all about Percy Harvin. The Seahawks employed Harvin, discarded to the New York Jets six weeks later, as a runner and a receiver. Harvin rushed four times for 41 yards, caught seven passes for 59 with a long gain of 33, and returned three kickoffs for 60 yards.

His speed overwhelmed Green Bay. Seattle amassed 398 yards of offense to 255 for the Packers and held Rodgers to 189 yards, one TD and 89.1 passer rating. He threw only one ball in CB Richard Sherman's direction, preferring to isolate WR Jordy Nelson against Byron Maxwell on the other side of the field.

Nelson finished with nine receptions, but Maxwell came up with a third-quarter interception that deflected off Nelson's hands.

"To keep Aaron down like that, I'm really excited about that," said Pete Carroll. "But I'm just as excited about how we ran the ball."

The Seahawks pounded out 207 yards -- 5.6 per attempt -- and held the Packers to 80, 34 by Eddie Lacy. Seahawks linebacker Bobby Wagner led the way with a career-high 14 tackles.

"I think we just got kicked out of bed and onto a cement floor, and it hurt," summarized Green Bay DL Mike Daniels.

Remarkable about Russell Wilson's three touchdown passes Saturday night in Seattle's 31-17 victory over Carolina is that all three scores came on third-and-long situations, starting with a third-and-nine at the Panthers 16 at the 1:01 mark of the first quarter. Wilson lined up in the shotgun.

Doug Baldwin beat safety Tre Boston on a double move, and Wilson lobbed high into the end zone, giving the Seahawks a 7-0 lead. In the second quarter, Jermaine Kearse made a one-handed grab on third-and-seven and took it 63 yards for a 14-7 Seattle lead. Luke Willson's TD catch in the fourth quarter, his first at CenturyLink Field, came on third-and-10 and staked the Seahawks to a 24-10 advantage.

Wilson's three touchdown passes on third down were one more than he produced on third down during the entire regular season. He tossed a 14-yard TD to Marshawn Lynch on third-and-five at San Diego Sept. 14, and a seven-yard touchdown to Baldwin on third-and-seven at Kansas City Nov. 16.

Wilson finished eight-for-eight for 199 yards on all of his third downs, and his 24.9 yards per attempt on those plays were the highest by a qualified quarterback in a game this season.

"I was really fired up for Russell, he had a great night on third downs," said Carroll. "Three third-down touchdown passes is just unheard of. How does that ever happen? He did a great job. That's just a fantastic night of coming through in critical situations."

This was a one-of-a-kind game for Wilson, who has produced several in the past three years, and one of the few performances of its kind by any quarterback in NFL playoff history.

Wilson, who had a 149.2 passer rating, threw three touchdowns without being intercepted and averaged 12.1 yards per pass. Only four other quarterbacks, and none since Peyton Manning in 2004, had such a game:

In addition to displaying some stunning hurdling ability when he tried to block a pair of field goal attempts, Kam Chancellor had 11 tackles against the Panthers and also delivered the game-clinching play: A 90-yard pick six off Cam Newton in the fourth quarter.

"He was all over the place," Carroll said of Chancellor. "All the big hits that he made, all the things that he did . . . it was just fantastic."

Chancellor's 90-yard interception return is the longest return of any kind in Seahawks history, topping the 87-yard kickoff return that Harvin stunned the Denver Broncos with in Super Bowl XLVIII.

Only two other Seahawks had a return touchdown of any kind longer than 70 yards in a playoff game. Charlie Rogers returned a kickoff 85 yards against Miami Jan. 9, 2000, and Marcus Trufant burned the Washington Redskins with a 78-yard interception Jan. 5, 2008.

Chancellor's return is also one of six pick-sixes in postseason history as long as 90 yards, and the first since James Harrison of Pittsburgh took one 100 yard against Arizona in Super Bowl XLIII (Feb. 1, 2009). The six:

"It's a credit to the defensive line on that interception," said Chancellor. "I look back and I see Cam (Newton) just under pressure and it looked as if he was going to get tackled and he threw the ball right to me. I read the play, I saw the defensive line get pressure on Cam, credit goes to them, and I just finished the play."

Richard Sherman, who also intercepted Newton, had two things to say about Chancellor.