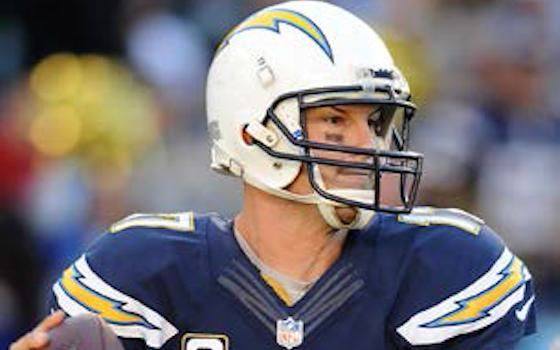 The San Diego Chargers, led by the standout play of quarterback Philip Rivers, sit atop the AFC standings with a 5-1 record, which is tied for the best in the NFL with Dallas and Philadelphia.

San Diego earned its fifth consecutive victory in Week 6 with a come-from-behind win on the road against Oakland. Trailing 28-21, Rivers orchestrated two fourth-quarter scoring drives to seal the 31-28 victory, capped off by a one-yard touchdown run by undrafted rookie running back Branden Oliver with 1:56 remaining.

Rivers completed 22 of 34 passes (64.7 percent) for 313 yards with three touchdowns and no interceptions for a 123.8 passer rating on the day. He has posted a passer rating of 120 or better in five consecutive games, surpassing Pro Football Hall of Famer Johnny Unitas (four in 1965) and Kurt Warner (four in 2009) for the longest such streak in NFL history (minimum 15 pass attempts in each game).

"There are small, different stats that obviously someone's kept for a long time, and they are meaningful," says Rivers. "When you know you were tied with Unitas and Warner, what it says is that we've had a great five-game stretch."

The Chargers are 5-0 in those games and have outscored opponents by an average of 14.8 points per game during that span (147-73).

A five-time Pro Bowl performer, Rivers has been particularly efficient since head coach MIKE MC COY took the helm in San Diego in 2013, leading the league in completion percentage (69.4 percent) and ranking second only to Denver's PEYTON MANNING in passer rating during that span (108.7).

"The thing that makes Philip Rivers so good is his ability to recognize what the defense is doing and really put his team in the best possible play," says NFL Network analyst and former Chargers running back La Dainian Tomlinson, who played alongside Rivers for six seasons in San Diego. "Even in his 11th year, he's still getting better in terms of learning defensive concepts. He's playing better than I've ever seen him play."

Rivers, who has led the NFL in average gain in three previous seasons (2008-10), aims to join Pro Football Hall of Famers SID LUCKMAN (seven) and STEVE YOUNG (five) as the only players to lead the league in average gain in at least four different seasons.

The NFL players to lead the league in passing yards-per-attempt average in the most seasons: