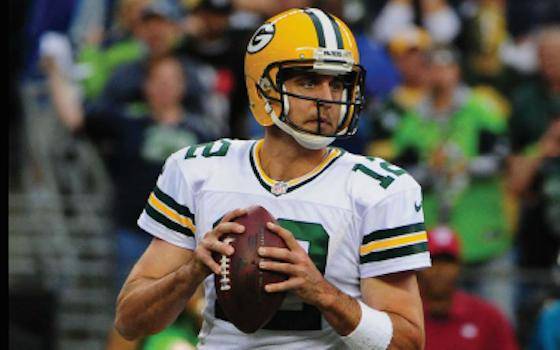 Drafted in the first round (No. 24 overall) of the 2005 NFL Draft out of California, Green Bay Packers quarterback Aaron Rodgers appeared in seven games during his first three seasons before taking over as the team's starting quarterback in 2008.

"People really count on me to be consistent each week and to play well," says Rodgers. "If I'm playing consistent and doing things I know I'm supposed to do, we'll be able to have some success because of it."

In the postseason, he has won five games (5-4 record), including Super Bowl XLV when he was named the game's Most Valuable Player.

"Aaron is the leader of the Green Bay Packers," says head coach MIKE MC CARTHY about Rodgers, "and serves as a great example to our entire organization, fans and community."

Earlier this season, Rodgers reached 25,000 career passing yards and is one of only five players all-time to reach the milestone in his first 100 games. Rodgers, who reached the mark in his 98th game, needed the fewest attempts (3,065) in NFL history to accomplish the feat.

The players with the most passing yards in their first 100 games:

Last week against Minnesota, Rodgers threw three touchdown passes, including the 200th of his career. He reached 200 touchdown passes in his 99th game, the second-fastest in NFL history behind only Pro Football Hall of Famer DAN MARINO (89 games).

The NFL quarterbacks to reach 200 touchdown passes in the fewest number of games:

At the time of his 200th career touchdown pass, Rodgers had thrown only 53 interceptions, the fewest at the time of the milestone and 35 fewer than the next closest player (TOM BRADY, 88).

The NFL quarterbacks with the most touchdown passes in their first 100 NFL games:

In his career, Rodgers has a 105.4 passer rating, the highest mark in NFL history (minimum 1,500 attempts).

Rodgers has 200 career touchdown passes and only 53 interceptions for a TD/INT ratio of 3.77, the best mark in league history (minimum 1,500 attempts).