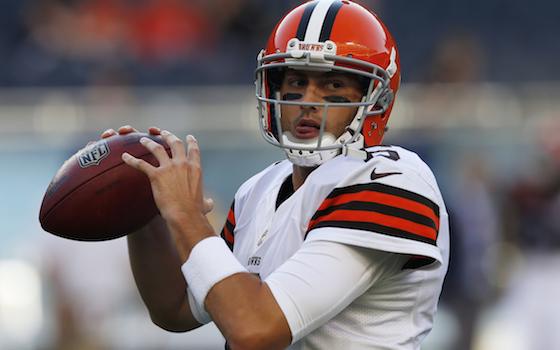 The race to the playoffs intensifies with first place in the division on the line. Earning a division win increases in importance as the AFC North is the only division in the NFL with each team boasting a winning record. Only four times previously has a division had all four teams with winning records this late in a season since realignment in 2002.

The NFL seasons that featured all teams in the same division with a winning record this late in a season since realignment in 2002:

"We're a savvy group and we overcame some adversity against the Jaguars to win," says Bengals head coach MARVIN LEWIS. "We'll take a look at it, and get everything fixed because we have a tough division game on Thursday. We are definitely looking forward to Thursday night."

The Bengals are 13-0-1 in their past 14 regular-season home games. During that span, quarterback ANDY DALTON has passed for 3,385 yards with 26 touchdowns and a 95.4 passer rating.

Cleveland enters Thursday night also coming off of two consecutive victories. In Week 9, the Browns defeated Tampa Bay 22-17 for their fourth win in five weeks. With five wins on the season, Cleveland has already exceeded its win total of 2013.

Gipson secured his league-leading sixth interception against the Buccaneers on Sunday and leads a defensive unit that has forced 13 takeaways this season, helping Cleveland tie for fourth in the AFC with a +6 turnover differential. Since 2013, Gipson also leads all NFL players with 11 interceptions.

Quarterback BRIAN HOYER heads into his 12th start with the Browns and aims for his ninth consecutive game with at least 200 passing yards. As a starter in Cleveland, Hoyer has led the team to an 8-3 record with 2,629 passing yards and 15 touchdowns for an 88.2 passer rating. In his only career start against Cincinnati last season, Hoyer passed for 269 yards with two touchdowns for a 103.9 passer rating on the way to a 17-6 victory over the Bengals.

The Browns and Bengals have split the season series each of the past two seasons, with the home team emerging victorious each time. Cincinnati leads the all-time series, 43-38. Cleveland is 4-6 in Thursday night games, including a 37-24 victory over Buffalo last year at First-Energy Stadium on Oct. 3. The Browns are 21-29 in prime-time games. The Browns and Bengals have met twice (1983 and 1986) in Thursday night action with the series even at 1-1.

Since 2012, GENO ATKINS has 20 sacks, tied for most among NFL DTs. LB VONTAZE BURFICT had FR-TD in last meeting. DE CARLOS DUNLAP has 4 sacks in past 6 vs. AFC North. S REGGIE NELSON leads team w/ 51 tackles.