NFL 2014: Playoff Races Heating Up as NFL Season Rolls On 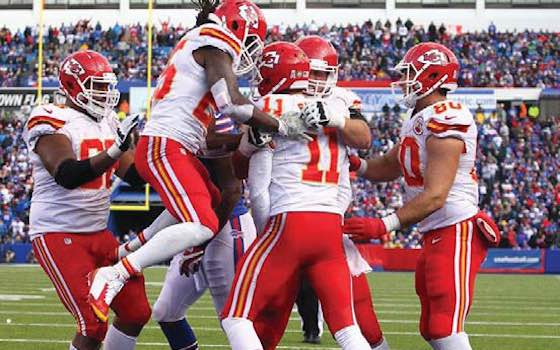 NFL 2014: Playoff Races Heating Up as NFL Season Rolls On

The NFL has entered the second half of the season and the excitement is building as playoff races tighten.

The action continues in week 11 of the 2014 NFL regular season with an exciting schedule of games including for the first time in NFL history this late in a season, four games between teams with winning percentages of .667 or better:

The Sunday slate includes an afternoon matchup between two of the top teams in the NFC, as Arizona hosts Detroit. This season marks the first time the Cardinals have owned the best record in the NFL after nine games since 1966, when they started 7-1-1. The Lions, meanwhile, are 7-2 and off to their best start since 1993.

"We don't give out any awards after nine games of the season," says Detroit head coach JIM CALDWELL, whose 7-2 start is the best of any head coach in his first season with the franchise since 1931 (POTSY CLARK, 8-1). "We haven't done anything yet. We've been playing tough, but it's a long season. It's a journey and we're still on that journey."

Entering Week 11, there are 21 teams either in or within one-and-a-half games of a playoff spot. Some of the key games this week:

The Chiefs host the Seahawks in a battle of second-place teams that have hit their respective strides. Seattle posted a franchise-record 350 rushing yards in a 38-17 victory against the Giants, the Seahawks' third consecutive win. Pro Bowl running back MARSHAWN LYNCH led the way with 140 rushing yards and a career-high four TDs.

"That's what we're capable of every week, and it finally clicked," says Seattle guard J.R. SWEEZY. "We were finally all on the same page and we finally played our style of football. You could feel it. We just had an attitude of getting after them, and we did. Our tempo was up, and it really showed."

Kansas City has rebounded from an 0-2 start to win six of its past seven games, including a 17-13 come-from-behind victory at Buffalo after erasing a 13-3 fourth-quarter deficit last week.

"There's a certain toughness that it takes to not only play in the NFL, but come back from a deficit like that and our guys showed that today," says Kansas City head coach ANDY REID. "They showed real grit there that second half."

The Eagles travel to Green Bay to face the Packers on Sunday afternoon, as both teams are coming off impressive victories in Week 10. Philadelphia defeated Carolina 45-21 on Monday Night Football, as MARK SANCHEZ passed for 332 yards and two touchdowns for a 102.5 passer rating in his first start with the Eagles.

"It was just a great night," says Sanchez, who became the first quarterback in Eagles history to pass for 300 yards with a rating of 100 or better in first start with the team. "It was so fun to get back out on the field. It's good to get back in an environment like this in front of this crowd and in front of all of those players that work so hard during the week."

Quarterback AARON RODGERS threw six touchdown passes, all in the first half, during the Packers' 55-14 win against the Bears, tying the NFL record for the most TD passes in a half (DARYLE LA MONICA, October 19, 1969 vs. Buffalo).

"We did a lot of good things on offense," says Rodgers. "We got into a rhythm early. That's the way you want to play moving into the second half of the season."

Two of the NFC's top teams will meet as Arizona hosts Detroit on Sunday afternoon. The Lions have scored the game-winning points inside the 2:00 minute mark of the fourth quarter to win in regulation in each of their past three games, becoming the first team to do so since the 1994 New York Giants.

"I just think that you can sense that they have a lot of poise," says Caldwell. "They don't mind a little pressure, they know how to hang in and come from behind. Sixty minutes, whatever it takes, they're willing to give it."

Arizona is 8-1 for the first time since 1948 and the third time in franchise history (1925, 1948 and 2014). The Cardinals sealed a 31-14 victory against the Rams with two fourth-quarter defensive touchdowns by cornerbacks PATRICK PETERSON (30-yard interception return) and ANTONIO CROMARTIE (14-yard fumble return).

"We got into the zone, got the momentum on our side and left it all on the field," says Arizona defensive end CALAIS CAMPBELL, who posted two sacks against St. Louis.

Sunday's exciting schedule finishes with a primetime battle of first-place AFC teams, as the Colts host the Patriots. Following a 2-2 start, New England has won five games in a row and outscored its opponents by an average of 18.6 points per game during those contests.

Quarterback ANDREW LUCK, who leads the NFL with 3,085 passing yards, has led the Colts to six wins in their past seven games.

Week 11 concludes with an AFC tilt featuring the Pittsburgh Steelers and Tennessee Titans on Monday Night Football. The Steelers' offense averaged 41.3 points per game during a three-game winning streak before a 20-13 loss to the Jets last week. But Pittsburgh remains only a half game back of first-place Cleveland.

"Everyone's right there together," says defensive end BRETT KEISEL of the AFC North, which is the first division in which every team is at least two games above .500 at any point in the season since the 1935 NFL Western Division. "We need to assert ourselves."

Tennessee will be looking for continued progress from rookie quarterback ZACH METTENBERGER (Round 6, No. 178 overall), who has passed for 478 yards and three touchdowns in two games since being named the starter in Week 8.

"He did some good things today, and made some good throws," says Tennessee head coach KEN WHISENHUNT of Mettenberger's performance at Baltimore. "I think he did a nice job in operating today in this environment, which is not easy."

NFL 2014 - Playoff Races Heating Up as NFL Season Rolls On