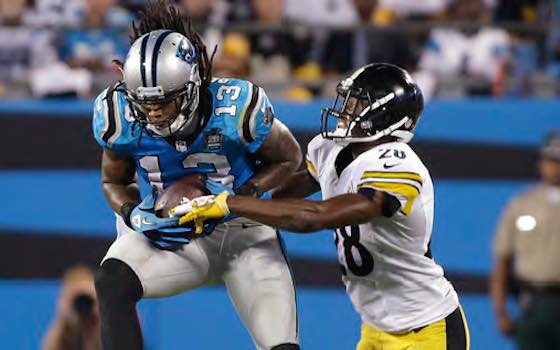 The NFL has entered the second half of the season and rookies around the league continue to make an impact.

Rookies at the wide receiver position have put up impressive numbers. Seven rookie wide receivers have at least five touchdown receptions, which is already the most for an entire season in NFL history. Carolina's Kelvin Benjamin leads the class with seven, followed by Arizona's John Brown (five), Tampa Bay's MIKE EVANS (five) and Philadelphia's Jordan Matthews (five). New Orleans' Brandin Cooks has scored four total touchdowns (three receiving, one rushing) and the New York Giants' Odell Beckham, Jr. has the most receiving yards (264) in the NFL among all players over the past two weeks.

Offensive guard Zack Martin has been a key component on the Cowboys' offensive line, which has led the way for rushing leader DeMarco Murray.

And on defense, linebacker Anthony Barr of Minnesota, defensive tackle Aaron Donald of St. Louis and cornerback Kyle Fuller of Chicago have all played a significant role for their clubs.

A closer look at some of the outstanding NFC rookies in 2014 (listed alphabetically):

Barr leads NFL rookies with four sacks and his three defensive fumble recoveries are tied for the most among all players. In Week 8 (October 26), he was named the NFC Defensive Player of the Week. In that game, he forced a fumble and returned it 27 yards for the game-winning touchdown in overtime.

"He's as good of a rookie as I've had at the linebacker position," says Vikings defensive coordinator George Edwards. "I've coached linebackers a long time in this league. He has as much potential as anyone. He's ahead of the curve."

In five games played, Beckham has registered 25 catches for 370 yards and three touchdowns. He had a two-touchdown performance in Week 7 (October 19) and has recorded back-to-back 100-yard games in the past two weeks. He has 264 yards in the past two games, the most in the NFL by any player during that span.

"Odell has done some really good things," says Giants quarterback Eli Manning. "He has shown he can make a lot of plays for us. He's up for whatever challenge is thrown at him and he is still growing as a player. He definitely does some good things for us and he's going to keep getting better and making plays."

Benjamin leads all rookies with 659 receiving yards and seven touchdowns. He ranks third in the NFL among rookies with 43 receptions. Five of Benjamin's seven touchdowns have been for at least 20 yards. He was named the NFL Offensive Rookie of September when he became the only rookie in the past decade with a 25+ yard touchdown catch in three of his team's first four games.

"The thing about Kelvin Benjamin is that it's not too big," says Carolina head coach Ron Rivera. "You worry about bringing a rookie in and sometimes it is too big. From the first time he stepped on the practice field, you could see he fits what we do. He fits the system, he fits the style, he fits the NFL."

"One of the things that separates him from most guys, not just rookies, is he doesn't slow down to change directions," says Cardinals quarterback Carson Palmer. "He carries his speed through his routes other than running comebacks and curls where you have to stop your body and go in the opposite direction. When he's running out-cuts and in-cuts, he really maintains his speed well. That's not something you coach. It's not something you learn in Year 6, 7 or 8 in the NFL. It's something you've either got or you don't. And he's got it."

Cooks is tied for the rookie lead with 48 receptions and his 500 receiving yards rank fifth among NFL rookies. He has scored four touchdowns -- three receiving, one rushing -- and became the youngest player with both a rushing and receiving touchdown in a game in Week 8 (October 26).

"Aaron goes 100 miles per hour all the time on the field," says Rams linebacker James Laurinaitis. "I've never been around a defensive tackle like that. His quickness is uncanny for the position and he's able to be disruptive. I've been extremely impressed with him."

Evans is tied for third among rookies with five touchdown receptions and his 585 receiving yards are the third-most by a rookie. In Week 9 (November 2), he became the youngest player in NFL history with at least 100 receiving yards (124) and two touchdowns (two) in a game.

"He's got an unbelievable skill set and is super talented," says Buccaneers quarterback Josh McCown. "But more than that, his focus and attention to detail are what give Mike an edge. To see what Mike is doing now and how he's developing and coming along, that's huge for us. It's reflective of the way he works and the type of competitor that he is."

"I really think he's an up-and-coming star," says Bears cornerback Charles Tillman. "I see greatness. And I like how humble he is. He doesn't say a lot. He just does his job and goes about his business. I think he'll be a great player in this league."

Martin has started all 10 games for the Cowboys and has been a key member of an offensive line that has paved the way for NFL rushing-leader DeMarco Murray (1,233 yards). Dallas ranks second in the league averaging 153.2 rushing yards per game.

"He's pretty good," says Cowboys head coach Jason Garrett. "For me, the biggest thing with him is he just plays so maturely for such a young guy and has right from the start. We put him in on minute one and he acted like he's been doing this for a long time at this level against really good players. Nothing ever seems too big for him. He has all the traits that you want. And for a young guy, he's pretty impressive."

(Round 2, No. 42 overall, Vanderbilt): Matthews' five receiving touchdowns are tied for third among rookies and he has two games with two TDs. In Week 10 (November 10), he joined Randy Moss as the only rookies with at least 100 receiving yards (138) and two TD catches (two) on Monday Night Football.

"Jordan finds ways to get open," says Eagles quarterback Mark Sanchez. "You can't say enough about him. I don't want to say too much because he'll get a big head and his hat won't fit. But he's such a talent."