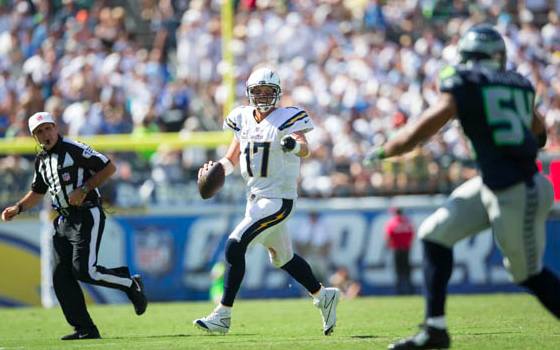 NFL 2014: What To Look For Week 3 (Drew McKernzie, Sportspress Northwest)

History shows that 0-2 teams advance to the playoffs more often than people might think. Since the current playoff format was instituted in 1990, 23 teams started 0-2 and still qualified for the postseason.

Last season, the Carolina Panthers started the season 0-2 and went on to win the NFC South after finishing 12-4, becoming the first team since the 2003 Philadelphia Eagles to earn a first-round bye after an 0-2 start.

Seven teams are undefeated through the first two weeks of the season -- Arizona, Buffalo, Carolina, Cincinnati, Denver, Houston, and Philadelphia -- and hope to move to 3-0 this weekend.

The highest league-wide completion percentage after Week 2 in NFL history:

The highest league-wide completion percentage in a season in NFL history:

Last week, the Green Bay Packers earned their first win of the season with a 31-24 victory over the New York Jets.

With a win on Sunday at Detroit, the Packers will become the second team in NFL history with 700 regular season victories. The Packers (699-538-37) would join Chicago (731-535-42) as the only teams to accomplish the feat.

The defending Super Bowl champion Seattle Seahawks (1-1) host the reigning AFC-champion Denver Broncos (2-0) in a rematch of Super Bowl XLVIII. The matchup marks only the sixth Super Bowl rematch to occur during the following regular season and the first since 1997.

The teams to play in a Super Bowl and play each other in the following regular season:

Dating back to last season, Denver quarterback PEYTON MANNING has thrown at least three touchdown passes with no interceptions in four consecutive regular-season games, tied with TOM BRADY (2007) for the most consecutive such games in NFL history.

Manning (47) holds the record for the most games with at least three touchdown passes and no interceptions in NFL history.

The quarterbacks with the most games with at least three touchdown passes and zero interceptions:

With a touchdown connection this weekend, Brees-Graham and/or Brady-Gronkowski can tie PEYTON MANNING and DALLAS CLARK (44) for the third-most such touchdowns all-time.

The most touchdown connections between a quarterback-tight end in NFL history:

With at least five catches and 50 receiving yards against Carolina on Sunday Night Football, Brown will tie LAVERANUES COLES (19) for the most consecutive such games in NFL history. Brown's streak dates back to Kickoff Weekend last season.

The players with the most consecutive games with 5+ receptions and 50+ receiving yards: