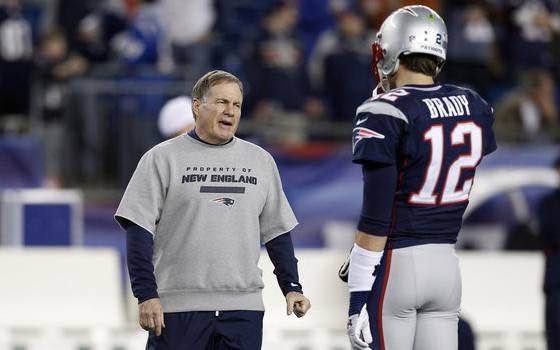 There are five new playoff teams in 2014: Arizona, Baltimore, Dallas, Detroit and Pittsburgh. Since the 12-team playoff format was adopted in 1990, at least four teams have qualified for the playoffs in every season that were not in the postseason the year before.

The 2014 field also showcases teams that have enjoyed recent postseason success. Since realignment in 2002, the Indianapolis Colts have been to the playoffs 12 times, the most in the NFL. The New England Patriots are second with 11 postseason berths and the Green Bay Packers rank third with 10 playoff appearances.

The teams with the most playoff appearances since 2002 (includes 2014):

The teams with the most seasons participating in the playoffs (includes 2014):

The 12 playoff teams and their postseason records:

The Green Bay Packers have won 13 NFL championships, the most in league history. Of the 12 playoff teams this season, 10 have won at least one championship.

The Dallas Cowboys and Pittsburgh Steelers have each won 33 postseason games, the most in NFL history. The Green Bay Packers have 30 postseason victories, tied for the third-most all-time.

Postseason victories for the 2014 playoff teams:

While home-field advantage throughout the playoffs is a coveted prize, it has been no guarantee of a trip to the Super Bowl. And like so much about the NFL, an unpredictable result is seemingly the only predictable outcome.

Since realignment in 2002, the New England Patriots have won 11 division titles, the most in the NFL during that span. The Green Bay Packers lead the NFC with eight division titles since 2002.

The teams with the most division titles since 2002:

The Denver Broncos posted a 12-4 record this season and became the 15th Super Bowl runner-up since 1990 to qualify for the playoffs the following season.

Since 1990, the Super Bowl runner-ups to advance to the postseason the following season:

The teams (since 2000) to finish with 8-0 records at home and their final season result:

The Dallas Cowboys finished the 2014 regular season undefeated on the road.

The Cowboys are only the sixth team since 1978 -- when the 16-game schedule was instituted -- to post an 8-0 record on the road. Of the previous five teams to accomplish the feat, four have gone to the Super Bowl (80 percent).

The NFL teams (since 1978) to post an 8-0 road record and their final season result:

The NFL playoffs have featured at least one overtime game in 11 of the past 14 postseasons.

In 2010, the NFL adopted a modified sudden-death system for the playoffs, which was expanded to cover all NFL games in 2012. The system guarantees each team a possession or the opportunity to possess, unless the team that receives the opening kickoff scores a touchdown on its initial possession. Play continues in sudden death until a winner is determined, and the game automatically ends upon any score.

A look at NFL overtime playoff games since 2000:

Quarterbacks TOM BRADY of New England, PEYTON MANNING of Denver and AARON RODGERS of Green Bay have enjoyed postseason success. The trio of quarterbacks, who have each won Super Bowl MVP honors, rank among the top in many postseason passing categories.

The quarterbacks with the highest postseason passer rating (min. 150 attempts):

Peyton Manning has nine career 300-yard passing games in the postseason, the most all-time, while Brady (six) is tied with Pro Football Hall of Famer JOE MONTANA, KURT WARNER and DREW BREES for the second-most in playoff history.

Rodgers has completed 210 of 318 passes for a 66.0 completion percentage, the fourth-best mark in league playoff history.

The quarterbacks with the highest postseason completion percentage (min. 150 attempts):

Quarterbacks PEYTON MANNING of Denver, AARON RODGERS of Green Bay and ANDREW LUCK of Indianapolis have each had a 400-yard passing game in the postseason.

Brady is one of only five players in NFL history to be named Super Bowl MVP multiple times and aims to join Pro Football Hall of Famer JOE MONTANA as the only players to win the award three times.

New England quarterback TOM BRADY has an 18-8 (.692) career postseason record, the most playoff wins all-time by a starting quarterback.

Tom Brady has an 18-8 (.692) postseason record, trailing only Pro Football Hall of Famers TERRY BRADSHAW and TROY AIKMAN for the best postseason record as a starting quarterback in NFL history (minimum 15 starts).

The quarterbacks with the best records in postseason starts (minimum 15 starts):

New England's TOM BRADY is one of four quarterbacks in NFL history to win at least three Super Bowls.

Only 11 QBs in NFL history have won multiple Super Bowls. Of the 11, three are active and seven have been inducted into the Pro Football Hall of Fame.

Baltimore's JOE FLACCO is poised to be the first quarterback of the Super Bowl era to start a playoff game in six of his first seven seasons in the NFL.

Indianapolis' ANDREW LUCK and Seattle's RUSSELL WILSON have led their teams to the postseason for the third consecutive season. Both can join a list of four quarterbacks during the Super Bowl era who have started a playoff game in each of their first three seasons beginning with their rookie year.

The quarterbacks to start a playoff game in each of their first three seasons in the Super Bowl era (since 1966):

Wilson has won 36 regular-season games in his first three seasons, the most by a quarterback in the Super Bowl era. Luck is tied for second with Pro Football Hall of Famer DAN MARINO and MATT RYAN with 33 wins.

Wilson can be the first quarterback to win two Super Bowls in his first three seasons in the league. He would also be the 12th quarterback in NFL history to win multiple Super Bowls.

Arizona quarterback RYAN LINDLEY will make his playoff debut this postseason. The players with the most passing yards in their first career postseason start:

The quarterbacks with the highest passer rating in a single postseason (min. 50 attempts):

The players with the most rushing yards in a single postseason:

Top Of The Hill

Cincinnati running back JEREMY HILL led all rookies with 1,124 rushing yards and nine touchdowns. He also joined Pro Football Hall of Famers ERIC DICKERSON (five in 1983) and CURTIS MARTIN (four in 1995) as the only rookies in NFL history with at least four 140-yard rushing games.

The rookies with the most rushing yards in a single postseason:

The rookies with the most rushing touchdowns in a single postseason:

Indianapolis wide receiver REGGIE WAYNE ranks second all-time in postseason catches (92) and fourth in receiving yards (1,242). He needs eight catches to join Pro Football Hall of Famer JERRY RICE as the only players in playoff history with 100 career receptions and 74 yards to eclipse CLIFF BRANCH (1,289) and Hall of Famer MICHAEL IRVIN (1,315) for No. 2 all-time. Wayne (nine) needs one touchdown catch to become the sixth player in NFL postseason history with 10.

Catch Me If You Can

Arizona wide receiver LARRY FITZGERALD holds NFL records for the most catches (30), receiving yards (546) and touchdown receptions (seven) in a single postseason. He set all three marks during the 2008 playoffs when the Cardinals advanced to Super Bowl XLIII.

The players with the most receptions, receiving yards and touchdown catches in a single postseason:

There are 14 players in the 2014 playoff field who recorded at least 1,000 receiving yards in the regular season

The players with the most receiving yards in a single postseason:

There have been eight 200-yard receiving games in NFL postseason history. Indianapolis' Hilton and Wayne, Baltimore's Smith, Detroit's Johnson and Denver's Thomas each had one of those performances.

The players with the most receiving yards in a postseason game:

Seattle running back MARSHAWN LYNCH (17) and Dallas wide receiver DEZ BRYANT (16) ranked No. 1 and 2 in total touchdowns this season, respectively.

The players with the most touchdowns in a single postseason:

Carolina wide receiver KELVIN BENJAMIN tied for the team lead in receiving yards (1,008), the most among NFL rookies active in the 2014 postseason.

The rookies with the most receptions and receiving yards in a single postseason:

Denver's JULIUS THOMAS (12), New England's ROB GRONKOWSKI (12) and San Diego's ANTONIO GATES (12) tied for the most touchdown catches amongst tight ends in 2014. Gronkowski's Patriots (No. 1 seed) and Thomas' Broncos (No. 2) each earned a first-round bye in the 2014 AFC playoffs.

The tight ends with the most touchdown receptions in a single postseason:

Baltimore linebacker TERRELL SUGGS has 12 career postseason sacks and is currently tied for third all-time with Pro Football Hall of Famer REGGIE WHITE. He needs 4.5 sacks to surpass White, Hall of Famer BRUCE SMITH (14.5) and WILLIE MC GINEST (16) for the most sacks in NFL playoff history.

The top five players with the most postseason sacks (since 1982):

Baltimore's ELVIS DUMERVIL had a franchise-record 17 sacks this season, the most of any player in the 2014 postseason.

The players with the most sacks in a postseason game and an entire postseason:

MOST SACKS IN PLAYOFF GAME

MOST SACKS IN A POSTSEASON

Indianapolis linebacker JONATHAN NEWSOME had 6.5 sacks, the most by any rookie in the 2014 postseason field.

The rookies with the most sacks in a playoff game and entire postseason:

MOST SACKS IN PLAYOFF GAME, ROOKIE

MOST SACKS IN A POSTSEASON, ROOKIE

Detroit safety GLOVER QUIN led the NFL with seven interceptions and became the first Lions player to lead the league in INTs since Pro Football Hall of Famer LEM BARNEY in 1967.

The players with the most interceptions in a playoff game and an entire postseason:

MOST INTERCEPTIONS IN PLAYOFF GAME

MOST INTERCEPTIONS IN A POSTSEASON

Baltimore linebacker C.J. MOSLEY and Denver cornerback BRADLEY ROBY each had two interceptions this season, tied for the most among NFL rookies in the 2014 playoff field.

The rookies with the most interceptions in a playoff game and an entire postseason:

MOST INTERCEPTIONS IN PLAYOFF GAME, ROOKIE

MOST INTERCEPTIONS IN A POSTSEASON, ROOKIE

Indianapolis kicker ADAM VINATIERI has scored 213 points and made 51 field goals in his playoff career, the most in NFL history. Vinatieri (four) also holds the record for the most postseason field goals of 50+ yards.

The players with the most points scored and field goals made in the postseason all-time:

HEAD OF THE CLASS

With a win, Belichick will tie Landry for the most playoff wins.

The head coaches with the most playoff wins:

The oldest head coaches to win a Super Bowl:

Since joining Baltimore in 2008, head coach JOHN HARBAUGH has led the Ravens to the playoffs in six of those seven seasons.

He is the eighth head coach in NFL history to guide his team into the postseason in at least six of his first seven seasons: