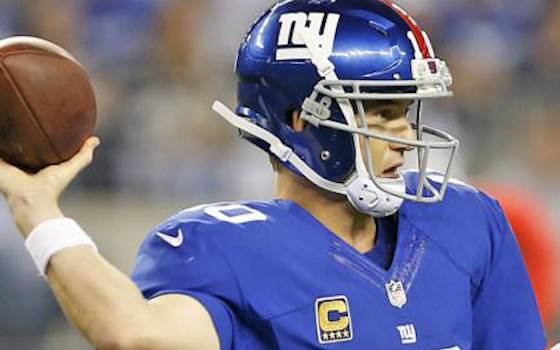 Week 5 of the NFL season was filled with exciting come-from-behind victories.

Five teams overcame a deficit of at least 10 points last week to win the game. That includes the Cleveland Browns, who erased a 25-point deficit at Tennessee to defeat the Titans 29-28. The 25-point deficit is the largest any road team has ever overcome en route to a victory in NFL history.

"I knew we had it in us to come back," says Browns quarterback Brian Hoyer, who threw three touchdown passes in the win. "We've shown throughout the first four games that we'll play until the end, and I think it was a complete, total team win: offense, defense and special teams."

The five teams to overcome a 10+ point deficit and win in Week 5:

"What people love about the NFL," says New Orleans Saints quarterback DREW BREES, "is that every game, every week, no matter who is playing, anything can happen. So many games come down to that last possession."

The five winning teams to overcome a 17+ point deficit this season:

As the NFL enters Week 6, 24 teams (75 percent) are currently either in first place or within a game of the top spot in the division. The standings are close and there's a lot of football left to be played. Some of the key games this weekend:

The Cowboys have won four in a row and are tied with Philadelphia and San Diego for the best record in the NFL at 4-1. Last week, Dallas notched a 20-17 overtime victory over in-state rival Houston. Running back DE MARCO MURRAY, who leads the league with 670 rushing yards and five rushing touchdowns, rushed for 136 yards in the win over the Texans. Murray joined Pro Football Hall of Famers JIM BROWN (1958) and O.J. SIMPSON (1973, 1975) as the only players in NFL history to rush for at least 100 yards in each of his team's first five games.

"Your record is what it is," says Dallas quarterback TONY ROMO about the team's 4-1 start. "You want to put yourself in the best position at the end of the year. Being 4-1 is great but we have a long way to go."

The Seahawks have won 19 of their past 20 games at home (including the playoffs), outscoring opponents 584-273 (15.6 points per game differential). In those 20 home contests, quarterback RUSSELL WILSON has thrown 36 touchdowns and only eight interceptions for a 109.6 passer rating. Last week in the team's 27-17 win at Washington, Wilson passed for 201 yards with two touchdowns and ran for a career-best 122 yards with a score to become the only player with at least 200 passing yards and 100 rushing yards in a Monday Night Football game.

"Russell had a phenomenal game," says Seattle head coach PETE CARROLL about his quarterback's performance against the Redskins. "He was everywhere. He did everything we could have asked of him."

After an 0-2 start, the Giants have won three in a row and sit just one game behind Philadelphia and Dallas in the NFC East.

In the past three games, New York has scored 105 points (35 per game). Last week, the Giants erased a 10-point deficit (20-10) and scored the final 20 points in a 30-20 victory. While veteran quarterback ELI MANNING recorded his third consecutive game with a 100+ passer rating (104.9), rookies ANDRE WILLIAMS (three-yard run) and ODELL BECKHAM, JR. (15-yard catch) each scored a touchdown -- the first time since 1985 that the Giants got both a rushing touchdown and receiving touchdown from rookies in the same game.

"Every game is the most important game of the season," says Giants head coach TOM COUGHLIN. "This is a divisional game. Philadelphia is playing very, very well. It is a game within the division and we're just excited about the opportunity."

Offense, defense and special teams. The Eagles are scoring touchdowns in all three phases of the game and their 4-1 record is tied for the best in the league. It was more of the same last week in Philadelphia's 34-28 win over St. Louis. On offense, quarterback NICK FOLES threw two touchdown passes. Defensively, linebacker TRENT COLE's sack and forced fumble resulted in defensive end CEDRIC THORNTON's fumble-recovery touchdown. And on special teams, tight end JAMES CASEY blocked a punt and safety CHRIS MARAGOS picked up the ball and ran 10 yards for a score.

"We're not happy with our performance but the most important thing was to get to 4-1, which we did," says Philadelphia wide receiver JEREMY MACLIN. "The bigger picture is wins and right now we're 4-1. We will learn from this and move on to the Giants."

After a 1-2 start, the 49ers have won two in a row. Running back FRANK GORE has posted consecutive games with 100 rushing yards, including 107 yards in last week's 22-17 win over Kansas City. The 49ers have won six consecutive Monday-night games, outscoring opponents 164-49. Quarterback COLIN KAEPERNICK hasn't lost a Monday start, compiling a 3-0 record and 126.8 passer rating.

"I think we're a good football team," says Davis. "The record is what it is, but we're a couple plays here and there from being where we want to be. We've got to stay the course. I think we're headed in the right direction."