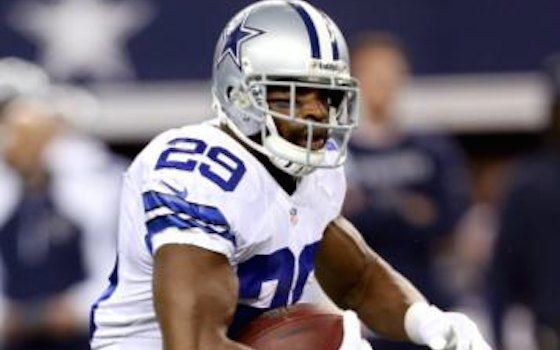 Dallas running back DE MARCO MURRAY has rushed for at least 100 yards and a touchdown in each of his first four games, tied with Pro Football Hall of Famer EMMITT SMITH for the fourth-longest such streak in NFL history to begin a season.

With at least 100 rushing yards and a touchdown against the Houston Texans on Sunday, Murray can join Pro Football Hall of Famers JIM BROWN (six) and O.J. SIMPSON (five) as the only players to do so in at least five games to begin a season.

The longest start-of-season streaks in NFL history with at least 100 rushing yards and a touchdown run:

Since the current playoff system (12 teams) was instituted in 1990, 25 teams have rebounded from a losing record after four weeks to qualify for the postseason, including the Philadelphia Eagles and Carolina Panthers in 2013. Four of those teams advanced to their Conference Championship Games, including the 2001 New England Patriots (1-3) en route to their Super Bowl XXXVI victory.

Since 1990, the NFL teams that started 1-3 or worse and made the playoffs:

Denver quarterback PEYTON MANNING has 499 career touchdown passes and can join BRETT FAVRE (508) as the only players with 500.

Favre recorded his 500th career touchdown pass in his 293rd game on his 9,924th pass attempt. Manning has 8,563 career attempts and will face the undefeated Arizona Cardinals (3-0) in his 244th regular season game on Sunday.

A look at how quickly Favre and Manning reached each major touchdown pass milestone in terms of games and attempts:

New Orleans quarterback DREW BREES has 39,936 passing yards since joining the Saints in 2006, the most of any NFL player during that span.

The quarterbacks with 40,000 passing yards with one team and the number of games it took each of them to reach the milestone:

The NFL quarterbacks with the most career passing yards:

JASON WITTEN of the Dallas Cowboys has 9,955 career receiving yards, the third-most among tight ends in NFL history.

With 45 receiving yards against Houston, Witten can join TONY GONZALEZ (15,127) and Pro Football Hall of Famer SHANNON SHARPE (10,060) as the only tight ends with 10,000 career receiving yards.

Witten, who will play in his 180th career game in Week 5, can become the second-fastest tight end to reach the milestone. Gonzalez reach 10,000 yards in his 177th game, while Sharpe did so in his 203rd game.