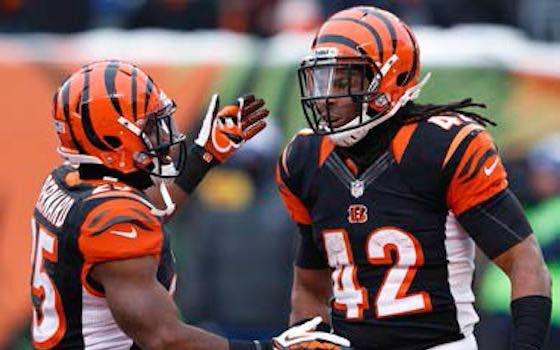 All four teams in the AFC North are currently within a half game of first place in the division following the Steelers' 27-24 win at Tennessee on Monday Night Football. Cincinnati (6-3-1) holds the slightest of edges over Pittsburgh (7-4), Baltimore (6-4) and Cleveland (6-4) for the top spot in the division.

"It has always been competitive, but this year you are really seeing the youth and talent that has been on these teams stepping up and growing into those roles," says Cincinnati tackle ANDREW WHITWORTH. "It's going to be a heck of a challenge to win this division."

The AFC North is the first division in which every team is at least two games above .500 at any point in the season since the 1935 NFL Western Division.

"When you play against playoff-caliber teams, it definitely helps you," says Pittsburgh safety WILL ALLEN. "Being in a tougher division brings better competition and it brings a greater preparation for what's to come."

"I probably feel the same way I felt about it when the season opened, this is the best division in football," says Baltimore head coach JOHN HARBAUGH. "That's only going to serve to make us all better in the end."

Since the AFL-NFL merger in 1970, only seven divisions have finished with a combined winning percentage of .700 or better outside the division. Three of those divisions produced that season's Super Bowl champions, including the 2013 NFC West. All seven of the divisions to accomplish the feat have featured at least two playoff teams, with four sending three teams to the postseason.

The Seattle Seahawks, who were one of three 10-win teams in the NFC West last year, finished with an NFC-best 13-3 record en route to the first Super Bowl championship in franchise history. The 2007 NFC East also produced the Super Bowl XLII-champion New York Giants (10-6), one of six Wild Card playoff teams to win a Super Bowl title. And the 1975 Pittsburgh Steelers (12-2) of the AFC Central went on to their second consecutive Super Bowl title.

With six weeks remaining in the NFL regular season and 12 teams in the AFC sporting records of .500 or better, all four AFC North teams are in a strong position to challenge for playoff spots.

"The meaningful games come at the end of November and December," says Cleveland quarterback Brian Hoyer.