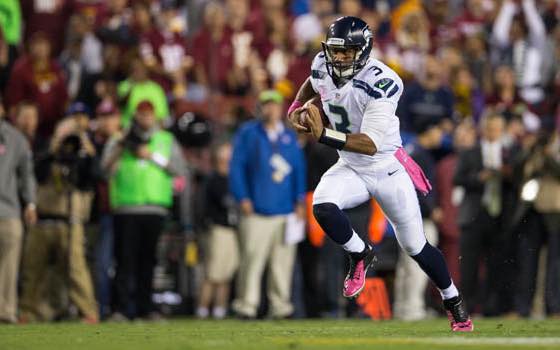 With three weeks remaining in the regular season, the suspense continues to build as teams make their final playoff push.

"In this league, it's important how you finish," says Seattle head coach Pete Carroll. "So we're going to see if we can finish in great fashion here."

No team has clinched a playoff berth leaving all 12 spots available with 24 clubs in contention for a trip to Super Bowl XLIX.

"There are a lot of teams that are fighting it out," says New England head coach BILL BELICHICK, whose team is tied for the best record in the NFL at 10-3. "What happens this year will be determined by what happens in the next few weeks. This is where this team and every other team will define itself."

In the NFC, no divisions can be clinched in Week 15. Arizona and Green Bay, who tie for the conference's best record at 10-3 (tied with Denver and New England for the top mark in the NFL), can each clinch a playoff berth with a win and other scenarios.

"We have bigger goals ahead," says Cardinals wide receiver LARRY FITZGERALD about the team reaching 10 wins. "We want to win our division and host playoff games. Those are our goals. This is just one step in that process."

The Cardinals will look to get that 11th win when the team opens the week on Thursday night against the Rams in an NFC West showdown. Some of the key games this week:

The Cardinals, who defeated Kansas City 17-14 last week, have won at least 10 games in back-to-back seasons for the first time since 1975-76. Arizona can clinch a playoff berth this week with a win combined with other scenarios. And, with three weeks remaining, the Cardinals remain in control for home-field advantage throughout the NFC playoffs with a chance to be become the first team to play a Super Bowl at its home stadium.

"The 10th win is a big win," says head coach BRUCE ARIANS. "We're not satisfied with 10, though. This team has something special about it. We've got a really tough stretch down the road, but I like where we're at."

St. Louis has recorded back-to-back shutout victories for the first time since 1945, including last week's 24-0 win at Washington. The Rams enter this contest having scored 83 unanswered points, the longest consecutive points streak in the NFL since 1992 (Buffalo).

"This is a familiar opponent that's playing well," says head coach JEFF FISHER about the Cardinals. "They're a good football team."

The Colts enter Week 15 with a two-game lead on Houston in the AFC South. With a win, Indianapolis will clinch the division. But the Texans can close the gap to just one game with a victory on Sunday.

Houston has won two in a row, including last week's 27-13 win over Jacksonville. Defensive end J.J. WATT had three sacks and became the fifth player to record at least 50 sacks (51) in his first four NFL seasons.

"We're in a must-win situation now," says Watt. "We've strung two wins together and we need to continue to do it. We need to go on the road and try to do it again this week."

Indianapolis notched its ninth win of the season with a 25-24 comeback win at Cleveland last week. Quarterback ANDREW LUCK passed for 294 yards, including the game-winning one-yard touchdown pass to T.Y. HILTON with 32 seconds remaining.

"Just glad we won," says Luck, whose 12,501 passing yards are the most by any player in his first three NFL seasons. "It's a big team victory."

The Broncos lead the AFC West by two games over the Chargers but San Diego can cut the lead in half this Sunday.

Denver can clinch the division with a win. With a win and other scenarios, the Broncos can earn a first-round bye. The team has won three in a row, including last week's 24-17 win over Buffalo. C.J. ANDERSON rushed for three touchdowns versus the Bills and has now scored five touchdowns during the club's three-game winning streak.

"There is a lot of familiarity between the two teams and coaching staffs," says quarterback PEYTON MANNING about the upcoming game against San Diego. "We have to go to their place in a division game and it'll be a big one."

Chargers quarterback PHILIP RIVERS has won 33 of his 40 career regular-season starts in December and January. With San Diego sitting at 8-5 in the competitive AFC playoff race, the Chargers will look for Rivers to once again guide them through the final month of the season.

"We've got the division leaders coming in this week and we know the challenges they present," says Rivers. "We know how hard it is to beat them but we do know how to beat them. And it's going to take our best to get that done."

For the second time in the past three weeks, the 49ers and Seahawks will meet. Seattle won the Week 13 matchup 19-3.

"You never know what can happen," says safety ANTOINE BETHEA, who ranks second on the team in tackles (71) and interceptions (three). "We have three games left and we have to take them one game at a time. We have to get ready for Seattle."

The Seahawks have won three in a row and are the first team since 2010 (New England) to have a three-game winning streak with all three victories over teams with a .600+ winning percentage and at least 10 games played (9-1 Arizona, 7-4 San Francisco and 9-3 Philadelphia).

"We're playing disciplined, sound football," says cornerback RICHARD SHERMAN, who had two interceptions in Seattle's Week 13 win at San Francisco. "We're having fun out there and enjoying each other."

First place in the NFC East is on the line when the Cowboys visit the Eagles on Sunday night. The teams enter Week 15 tied for the top spot in the division at 9-4. Philadelphia won the Thanksgiving Day meeting 33-10.

Dallas has the NFL's best road record (6-0) and posted a 41-28 victory at Chicago last Thursday night. In that contest, TONY ROMO threw three touchdown passes and DE MARCO MURRY rushed for 179 yards to push his league-leading total to 1,606 rushing yards.

"We're right in the hunt," says head coach JASON GARRETT. "We have challenges ahead and need to get ready for the next one in Philadelphia."

The Eagles can seize control of the division as a win will give them a one-game lead and a head-to-head sweep over the Cowboys. In the team's Week 13 victory at Dallas, LE SEAN MC COY rushed for 159 yards with a touchdown and JEREMY MACLIN had eight catches for 108 yards.

"Our attention has to go to Dallas and on winning the NFC East," says head coach CHIP KELLY. "We're not concerned with anything else besides that. Control what you can control. And that's what we can control right now."