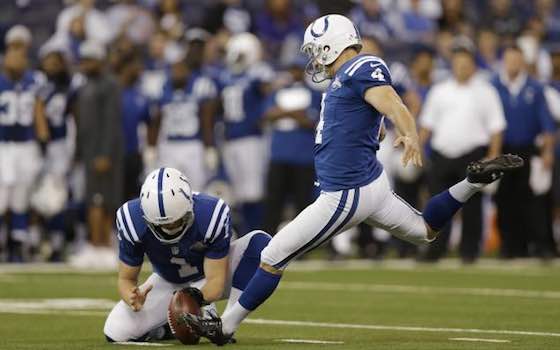 Indianapolis kicker ADAM VINATIERI ranks second in the NFL this season with 92 points and is tied with JASON ELAM (16) for the most seasons with at least 100 points scored in NFL history.

With at least eight points against New England on Sunday Night Football, Vinatieri can become the only player in NFL history to score 100 points in 17 different seasons.

The most seasons with 100 or more points scored in NFL history:

Since the current playoff format was instituted in 1990, 20 clubs with a losing record after nine games have made the playoffs.

Most recently in 2013, the Philadelphia Eagles (4-5) and San Diego Chargers (4-5) both had losing records through nine games before advancing to the postseason.

The 20 NFL Teams to qualify for the playoffs since 1990 with a losing record through nine games:

This Sunday features four games between teams with winning percentages of .667 or better, the first time this has happened this late in a season in NFL history.

The four matchups between teams with .667 or better winning percentages:

New England quarterback TOM BRADY has passed for 300 yards in 62 career games, tied with BRETT FAVRE for the fourth-most such games in NFL history.

With at least 300 yards on Sunday Night Football against Indianapolis, Brady can tie Pro Football Hall of Famer DAN MARINO (63) for the third-most such games all-time.

The most career 300-yard passing games in NFL history:

Denver wide receiver DEMARYIUS THOMAS extended his streak of 100+ yard receiving games to six last week with 11 receptions for 108 yards in the Broncos' 41-17 win over Oakland.

With at least 100 receiving yards on Sunday at St. Louis, Thomas can tie CHARLEY HENNIGAN and Pro Football Hall of Famer MICHAEL IRVIN (seven) for the second-longest streak of 100-yard receiving games in NFL history.

The NFL quarterbacks with the most consecutive 100-yard receiving games in NFL history:

Pittsburgh rookie wide receiver MARTAVIS BRYANT (Round 4, No. 118 overall) made his NFL debut in Week 7 in the Steelers' 30-23 win over Houston. Bryant has six touchdown receptions this season -- including at least one TD catch in each of his first four career games -- the most ever by an NFL player in his first four games.

With a touchdown catch at Tennessee on Monday Night Football, Bryant can tie BILLY HOWTON and CHARLIE BROWN (five) for the most consecutive games with a touchdown reception to start a career in NFL history.

The players with the longest streaks of consecutive games with a touchdown catch to start a career in NFL history: