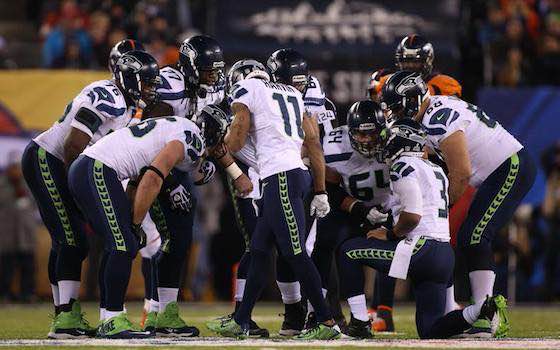 The final four teams are set and this Sunday will determine the two teams to play in Super Bowl XLIX. "It's fun to still be alive in the playoffs," says Green Bay quarterback Aaron Rodgers. "It's exciting this time of year when you're still playing."

Championship Sunday begins with the NFC title game between the Green Bay Packers and Seattle Seahawks in a rematch of the Kickoff opener which Seattle won 36-16. The Seahawks defeated Carolina 31-17 last week while the Packers knocked off Dallas 26-21. The AFC Championship Game will feature the Indianapolis Colts and New England Patriots who met in Week 11 with New England winning 42-20. The Patriots defeated Baltimore 35-31 in the Divisional round and Indianapolis won at Denver 24-13.

With each of the four remaining playoff clubs looking to capitalize on the momentum built this past weekend in hopes of advancing to Super Bowl XLIX, they'll have their work cut out for them on Championship Weekend.

A closer look at the AFC and NFC Championship Games:

The Packers and Seahawks met in the 2014 season opener -- won by the Seahawks 36-16 -- and will face one another in the NFC Championship Game with a trip to Super Bowl XLIX on the line.

"It's going to be one for the ages," says Seattle quarterback RUSSELL WILSON.

"It's exciting but the job's not done," says Wilson, who is 2-0 in his career against the Packers. "We're on one mission. You just have to take it one game at a time. Our goal is to go 1-0."

Seattle has won seven in a row, outscoring opponents 165-56. The Seahawks have been dominant in the second half of those games with a 102-20 advantage, including 62-7 in the fourth quarter. During the regular season, Seattle led the NFL in points allowed (15.9), total defense (267.1) and pass defense (185.6). The defense had two interceptions last week as Pro Bowl cornerback RICHARD SHERMAN notched his 25th career INT -- the most in the NFL since he entered in 2011 -- and All-Star safety KAM CHANCELLOR had a 90-yard interception-return touchdown, the longest in franchise postseason history.

"We're playing for each other," says Sherman. "That's been the biggest thing. Guys are doing whatever it takes to win. Guys are playing for one another, they don't care about stats. Championships are won in the playoffs."

Pro Bowl quarterback AARON RODGERS passed for 316 yards, three touchdowns and a 125.4 passer rating in Green Bay's 26-21 come-from-behind victory over Dallas last week to advance to the NFC Championship Game. Wide receivers DAVANTE ADAMS (117 yards) and RANDALL COBB (116) each had at least 100 receiving yards and running back EDDIE LACY rushed for 101 yards, his team record 10th consecutive game with at least 100 scrimmage yards. It marked the first playoff game in franchise history in which the Packers had a 300-yard passer, a 100-yard rusher and two 100-yard receivers.

In the postseason, Rodgers has a 105.3 passer rating, the second-best mark in NFL history and trailing only Seattle's Wilson among players with at least 150 attempts.

"We're going to have to be efficient against them," says Rodgers about playing Seattle's vaunted defense. "They're a great defense, they've got Pro Bowlers all over the place and they're well-coached."

The Patriots and Colts will meet in the playoffs for the fifth time since 2003, including the third time they'll play each other in the AFC Championship Game. In last year's Divisional round, New England knocked off Indianapolis 43-22 as the Patriots rushed for 234 yards and six touchdowns.

The two teams also faced one another in Week 11 of this season, a 42-20 New England victory. In that contest, the Patriots rushed for 246 yards and four touchdowns. Including the playoffs, the Patriots have won each of the past five meetings and are averaging 41.2 points per game.

The victory moved BILL BELICHICK into a tie with Pro Football Hall of Famer TOM LANDRY for the most postseason wins by a head coach with 20. This Sunday's game will be the ninth AFC Championship for Belichick and Brady together.

"That's what you play for," says Belichick. "You play to win your division, you play to be in the postseason and then you play to be in the AFC Championship Game and then you see what happens after that. That's what it's all about. That what you work all year for, it's to get to this point. Thankfully we'll be playing next week. It's great to have Tom and his ability and his poise and presence as our quarterback. Obviously he's done a tremendous job throughout the years. There's no quarterback I'd rather have than Tom Brady."

Pro Bowl quarterback ANDREW LUCK led the Colts to a 24-13 win at Denver last weekend and has now won three of his past four postseason starts. Luck, who threw for 265 yards and two touchdown passes in the Divisional victory over the Broncos, has 1,703 passing yards, the most by any player in his first five career playoff games in NFL history, surpassing the previous mark set by KURT WARNER (1,644).

"We're playing good team ball," says Luck, who has guided Indianapolis to the postseason in each of his first three NFL seasons. "We're feeding off each other. I'm so proud to be a part of it."

"The defense did a heck of a job and it's fun watching them making plays," says Luck about the Indianapolis defense. "I know we feed off their energy and I'd like to think they feed off of us and special teams. It was truly three phases working together, but, what a great job we did defensively."

The Colts will appear in their fourth AFC Championship Game since 2003 and have won the past two conference title games in which they've played. But the team knows the challenge won't be easy winning in New England.

"The Patriots are a great, great team," says Indianapolis head coach CHUCK PAGANO. "Hall of Fame coach. Hall of Fame quarterback. We all know how hard it is to win there. We know it will be a tall order but it's going to be a great opportunity for our guys. We'll continue to embrace this opportunity and prepare accordingly."