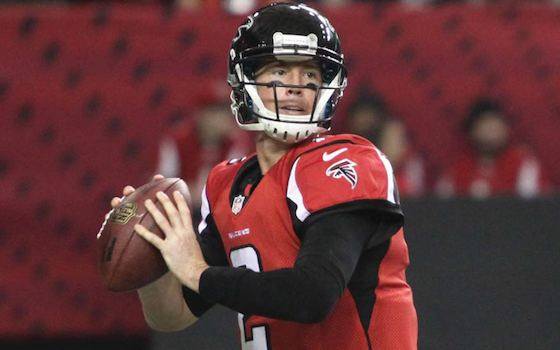 The Atlanta Falcons and Baltimore Ravens each used a first-round pick in the 2008 NFL Draft to select a quarterback.

The Falcons took Boston College's Matt Ryan with the third overall selection and the Ravens drafted Delaware's Joe Flacco with the No. 18 overall pick. Ryan and Flacco were the only two quarterbacks selected in the first round of the 2008 NFL Draft.

This Sunday, when Atlanta visits Baltimore, the two quarterbacks will face off for the second time in their careers. In the first meeting (November 11, 2010), each QB threw three touchdown passes and Ryan's Falcons were victorious by a 26-21 score.

Ryan and Flacco both started as rookies and each one led his team to the playoffs. They became the first two rookie quarterbacks in NFL history to start 16 regular-season games and lead their teams to the playoffs.

Now in their seventh seasons, Ryan and Flacco have enjoyed success at the NFL level and proven to be worthwhile first-round picks.

Flacco (first with 62 wins) and Ryan (tied for second with 60 wins) have the most wins by a starting quarterback in his first six NFL seasons since the 1970 merger.

And, since entering the NFL in 2008, Flacco and Ryan rank among the league's best during that time. Flacco's 66 wins are tied for the most in the NFL while Ryan's 62 victories are tied for fifth.

Since 2008, Ryan and Flacco are two of only five quarterbacks to start at least 100 games.

The five quarterbacks since 2008 to start at least 100 games (ranked by passing yards):

With at least 100 starts and more than six years of NFL experience, both Ryan and Flacco have already produced impressive resumes. A few of their highlights:

"Matt from Day 1 has shown he's an elite quarterback in the NFL," says Falcons head coach MIKE SMITH, who took over the team in 2008, Ryan's first season. "I go back to his very first pass back in 2008, a 62-yard touchdown. His first throw was a good one, and he's had a lot of them since then. The arrow is still going up. There's a lot more out there."

Flacco guided the Ravens to a victory in Super Bowl XLVII and was named the Super Bowl MVP. During that postseason run, he threw 11 touchdown passes and no interceptions, joining Pro Football Hall of Famer JOE MONTANA (1989) as the only quarterbacks in NFL history to accomplish the feat. Flacco has guided the Ravens to the playoffs five times (2008-12) and is the only quarterback in NFL history to win a playoff game in each of his first five seasons. He holds franchise records for career passing attempts (3,323), completions (2,009), completion percentage (60.5), passing yards (23,141), passing touchdowns (133) and passer rating (84.7).

"I think Joe is going to become one of the premier quarterbacks in the history of the National Football League," says Ravens head coach JOHN HARBAUGH, who joined Baltimore in 2008, Flacco's rookie season. "I've said that many, many times."

The career stats for Ryan and Flacco: