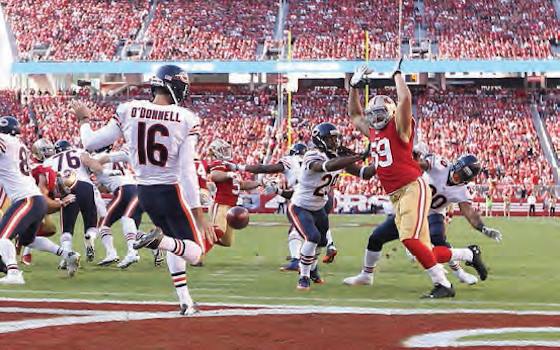 "What people love about the NFL," says New Orleans Saints quarterback Drew Brees, "is that every game, every week, no matter who is playing, anything can happen. So many games come down to that last possession."

That has certainly been the case early this NFL season.

In the first two weeks, there have already been three games in which a team overcame a 17-point deficit to come back and win. That is the most through the first two weeks of a season since 1999 when there were also three such instances.

In Week 2, both the Green Bay Packers (18 points) and Chicago Bears (17) came back from deficits of at least 17 points to win the game. It marked the first time in NFL history that both the Packers and Bears each overcame 17+ point deficits to win on the same day.

"Winning is always sweet because it's never easy," says Green Bay quarterback Aaron Rodgers. "This was a character-building win for us. Even when we're down, we're never out."

"We went to work and played four quarters," says Chicago head coach MARC TRESTMAN. "We didn't start well but our guys gathered themselves and went back to work. Our coaches and players stayed with it and finished the entire game."

Additionally, the Eagles overcame a 14-point deficit in Week 2 to defeat the Indianapolis Colts 30-27. Philadelphia, which trailed 20-6 in the third quarter, is the first team in NFL history to start 2-0 after trailing by at least 14 points in the second half of each game.

Another NFL team that has jumped out to a 2-0 start by fighting and clawing to win is the Arizona Cardinals. The Cardinals lead the NFC West and have used fourth-quarter comebacks to win each of their first two games.

On Kickoff Weekend, Arizona outscored San Diego 12-0 in the fourth quarter to pull out an 18-17 win. In Week 2, the Cardinals scored all 15 fourth-quarter points in a 25-14 come-from-behind win at the New York Giants. Arizona is the first team since the 1982 Green Bay Packers to start 2-0 after trailing entering the fourth quarter in both games and not allowing a single fourth-quarter point.

"We now understand how to win ballgames," says Cardinals cornerback PATRICK PETERSON. "We know how to finish out the fourth quarter. That's what it's all about. They're great team wins."