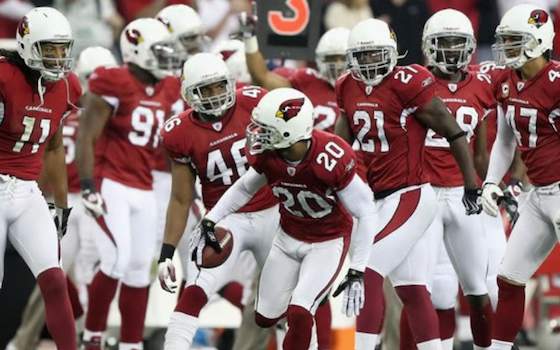 The first half of the NFL season has been packed with thrilling comebacks and close finishes, but the excitement is just getting started.

The NFL's Week 9 schedule features several marquee match-ups, highlighted by New England (6-2) hosting Denver (6-1) and Arizona (6-1) visiting Dallas (6-2). This week marks the first time two games featuring teams with at least six wins each has occurred this early in a season since 1986 (Week 9).

Several games in Week 8 were decided in the final moments, as four teams on Sunday scored game-winning touchdowns in overtime or with fewer than 90 seconds remaining in the fourth quarter (Arizona, Cincinnati, Minnesota and Seattle), the most such games on a single day since October 19, 2003.

Detroit also kicked a last-second field goal to beat Atlanta 22-21 in London, and Washington capped off the week with a thrilling 20-17 overtime win at Dallas on Monday Night Football.

"Any given day in the NFL can be a win or loss," says Washington running back ALFRED MORRIS, who rushed for 73 yards and one touchdown against Dallas. "They just kept fighting back. It was the type of game you get between Washington and the Cowboys."

After trailing Atlanta 21-0 at halftime, Detroit's victory marked the sixth time a team overcame a deficit of at least 17 points to win in 2014, the second-most such games through Week 8 of any season in NFL history (2011, eight games).

As the season's midpoint approaches, it's all still to be decided, with plenty of football still to play.

Since 2000, 34 teams have reached the halfway point of their season with a .500 or below winning percentage and advanced to the playoffs, including at least one in each season.

Of those 34 clubs, five have advanced to the Conference Championship Game, including the 2001 New England Patriots, who won Super Bowl XXXVI.

Week 9 kicks off on Thursday night on NFL Network with a key NFC South match-up as Carolina hosts New Orleans with first place in the division on the line. Saints running back MARK INGRAM helped lead New Orleans to a 44-23 win against Green Bay at home on Sunday Night Football, rushing for a career-high 172 yards on 24 carries with one touchdown.

"The offensive line did a great job and we've just got to keep improving, keep getting better," says Ingram. "Carolina is a good team, a great team. Those NFC South games are always tough so we're going to have to bring our ‘A' game."

The Panthers, who are looking to rebound from a 13-9 loss to Seattle, welcome the return of running back DE ANGELO WILLIAMS. Williams, who has missed the past four games with an ankle injury, will rejoin JONATHAN STEWART in the backfield as Carolina looks to take control of the division as the second half of the season begins.

"You've got to win within the division, and you've got to win at home," says Carolina head coach RON RIVERA. "That's the key. This is a good opportunity to be sharp. Our guys are playing hard. We've got to find ways to put them in position to have success."

Arizona will put its NFC-best 6-1 record on the line at Dallas this week. The Cardinals face an NFC East opponent for the second week in a row following a 24-20 home win against Philadelphia. Rookie wide receiver JOHN BROWN caught the game-winning 75-yard touchdown from quarterback CARSON PALMER with 1:21 remaining in the fourth quarter.

"We got exactly what we wanted out of the coverage and had the right play call," says Palmer, who passed for a season-high 329 yards and two touchdowns.

The Cowboys lost a 20-17 overtime decision against Washington last week, but remain in first place atop the NFC East at the halfway point of their season.

"We've got to put this one behind us quickly and get ready for the next challenge," says Dallas head coach JASON GARRETT. "Regardless of what the outcome is, you've got to get on to the next one."

The top two teams in the AFC will meet as quarterbacks TOM BRADY and PEYTON MANNING face off for the 16th time of their storied careers when the Patriots host the Broncos on Sunday afternoon.

"Every time we play a Peyton Manning-led team, it comes down to the wire," says Brady, who has a 10-5 career record against Manning, including the postseason. "Everything is usually at stake."

Both players are at the top of their games, as Brady (129.1) and Manning (127.4) ranked No. 1 and 2, respectively in passer rating in the month of October, as each player led their teams to identical 4-0 records for the month.

"I think both teams are familiar with each other's systems, both offensively and defensively," says Denver head coach JOHN FOX. "It will be a huge test for both teams, obviously an important conference game for both teams and we're looking forward to the opportunity."

An exciting Sunday of NFL action will wrap up as Pittsburgh hosts Baltimore on Sunday Night Football. This marks the second primetime meeting between the AFC North rivals this season, as the Ravens beat the Steelers 26-6 on Thursday Night Football in Week 2. Quarterback BEN ROETHLISBERGER is coming off a career performance in the Steelers' 51-34 win against Indianapolis, setting franchise passing records for yards (522) and touchdowns (six) against the Colts.

"The guy was in a zone," says Pittsburgh tackle MIKE ADAMS of Roethlisberger, who is the only player in NFL history with two career 500-yard passing games. "It was something that was awesome to be a part of. To be the only guy to have two 500-yard games, and to be in there for one of them is something you will never forget."

Baltimore's defense, which ranks first in the AFC with 16.4 points per game allowed, will look to slow down the Steelers' offense this week as the two teams renew their rivalry.

Week 9 wraps up with an interconference match-up on Monday Night Football as the first-place Colts travel to New York to face the Giants. Indianapolis has averaged 31.3 points per game, which ranks second only to Denver, during its 5-3 start. Quarterback ANDREW LUCK has an active streak of six 300-yard passing games, which surpassed PEYTON MANNING (five games in 2009) for the longest streak in franchise history.

"We are at the halfway point," says Indianapolis head coach CHUCK PAGANO. "We know it's a marathon, not a sprint. We have a big game coming up on Monday night."

Coming off an impressive three-game winning streak in which they outscored opponents 105-51, the Giants lost back-to-back divisional games heading into their Week 8 bye. With Dallas (6-2) and Philadelphia (5-2) ahead of them in the NFC East, the Giants have reached a pivotal point in their season.

"We've got nine games to play as well as we can possibly play," says Giants head coach TOM COUGHLIN. "I think anybody in our locker room can do that. Let's go. One at a time."