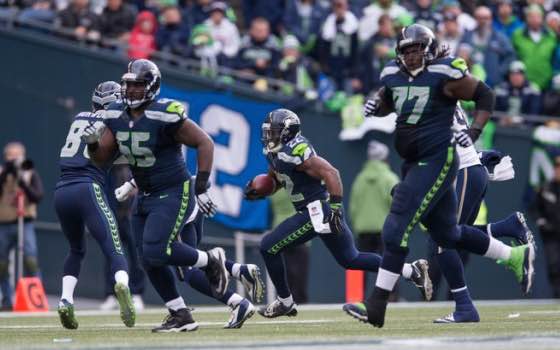 And then there were eight.

On Saturday, January 10, the New England Patriots (12-4), the AFC East champions and the conference's No. 1 seed, will host the Baltimore Ravens (11-6) at Gillette Stadium to kick off the weekend (NBC, 4:35 PM ET). That night in primetime (FOX, 8:15 PM ET), the defending Super Bowl champion Seattle Seahawks (12-4), who won the NFC West and have home-field advantage throughout the NFC playoffs, will face the Carolina Panthers (8-8-1), who captured the NFC South, at CenturyLink Field.

"You've got to play your biggest at the biggest moments against the best teams in the toughest conditions," says Patriots quarterback TOM BRADY. "You've got to see what you're made of. That's what this tournament is all about."

A look at this weekend's Divisional Playoffs:

For the fourth time in the past six seasons, the Ravens and Patriots will meet in the playoffs. All three previous meetings have been at New England yet the visiting Ravens have won two of those contests.

"You have to play these games to win," says Flacco, who with his fifth consecutive postseason game with a 100+ passer rating tied Pro Football Hall of Famer TROY AIKMAN for the second-longest streak in NFL history. "We're fighting for the big prize. You have to go out there and you let everything go. You can't worry about the outcome."

The Patriots have won six consecutive AFC East titles and earned a first-round bye for the fifth season in a row. At 12-4, New England became the sixth team in NFL history to post at least 14 consecutive winning seasons and the first to do so since San Francisco (1983-98, 16 seasons). Quarterback TOM BRADY has 18 career postseason wins, the most in NFL history. Head coach BILL BELICHICK has 19 playoff victories and can tie Landry (20) for the most in league history.

"In the playoffs, it's the same for everybody -- one loss and you go home," says Brady. "You try to play to your strengths and get ready to go so you can be at your best when you really need it the most. There's only one team out of 32 that gets to win it each year. Hopefully you're the one that gets the chance to do it. We've got a great football team here, so we'll see. We've got to go out there and earn it."

Related: Why the Patriots Will Hold Off the Ravens

Carolina and Seattle will meet in the postseason for the second time. The Seahawks defeated the Panthers 34-14 on January 22, 2006 in the NFC Championship Game. The teams have met four times in the past five regular seasons with Seattle winning all four, including a 13-9 victory in Week 8 earlier this year.

"Guys have come together and bought into what we are doing," says Panthers linebacker LUKE KUECHLY, who had a game-high 10 tackles and an interception in the Wild Card victory. "We took the first step and it's an absolutely awesome feeling."

The defending Super Bowl champion Seahawks won the NFC West and secured home-field advantage for the second consecutive year. Over the past three seasons, including the playoffs, Seattle is 24-2 (.923) at home. The Seahawks enter the postseason having won six in a row and are the first team since 1976 (Pittsburgh) to win its final six games and allow fewer than 40 total points (39).

"We're exactly where we want to be," says Seattle quarterback RUSSELL WILSON, who is 40-13 (.755) as a starter (including the playoffs), including a 24-2 (.923) mark at home. "To be going into the playoffs, have a first-round bye and be the No. 1 team in the NFC, that's what you want. Most importantly, we get to play at home again and in front of the best fans in the world. We're high on confidence, like always. But we have to play great football, one game at a time."

Related: Cam Newton Must Be 'Superman'

The Cowboys and Packers have met six times in the postseason with Dallas winning each of the past four contests. The teams last played a playoff game in Green Bay in the 1967 NFL Championship Game -- known as the "Ice Bowl" -- which the Packers won 21-17.

Dallas knocked off Detroit 24-20 last week as the Cowboys overcame a 14-point deficit. Quarterback TONY ROMO -- who led the NFL with a 113.2 passer rating -- threw two touchdown passes and had a 114 rating in the Wild Card win.

"To be among the final eight teams, it's something we certainly feel good about," says Dallas head coach JASON GARRETT. "Challenges are ahead and we're excited to be a part of it."

"It's great to be playing at home, we prefer to play here," says Packers head coach MIKE MC CARTHY. "This is playoff football and everything changes. But this is definitely where we want to play."

"This is a fun team to be on and the guys believe in each other, fight for each other and we stick together," says Rodgers, who ranks second in NFL postseason history with a 103.1 passer rating. "Winning the division was important as was getting that home playoff game. We're 8-0 at home so we want to keep that streak alive. This is what we love to do. I love the competition. We're all passionate about this game."

Related: How the Cowboys Make It to the Super Bowl

The Colts will visit the Broncos in a rematch of their Kickoff Weekend meeting. In Week 1, Denver's PEYTON MANNING and JULIUS THOMAS connected on three touchdowns as the Broncos won 31-24.

Indianapolis advanced to the Divisional round with a 26-10 victory over Cincinnati as quarterback ANDREW LUCK threw for 376 yards and a touchdown and wide receiver T.Y. HILTON had 6 catches for 103 yards. Luck has now thrown for at least 300 yards in three consecutive playoff games -- tied for the second-longest streak in NFL history -- and Hilton has 496 career receiving yards in the postseason, the second-most in NFL history in a player's first four playoff games.

"We played great team football and we're moving on to the next round," says Luck. "We've got a tall order playing Denver at Denver but we're excited about that and up for the challenge."

Manning won nine playoff games -- including Super Bowl XLI -- with the Colts. He has 6,589 passing yards and nine 300-yard games in his postseason career, both tops in NFL history.

"We're excited and looking forward to the postseason," says Manning. "This is always an exciting time for football. This is why you work so hard all season to get this opportunity. Playoff football takes on different twists and turns. You're going to play some really good football teams."

The Broncos, who won the AFC West, finished the regular season 8-0 at home, outscoring opponents 283-166. Over the past two seasons, including the playoffs, Denver has won 17 of its past 18 at Sports Authority Field at Mile High.

"We're excited and glad to be playing at home," says Manning. "We know our crowd will be into it and be a big factor."

Related: How the Colts Can Upset the Broncos