NFL Too Popular To Be Threatened By Anything 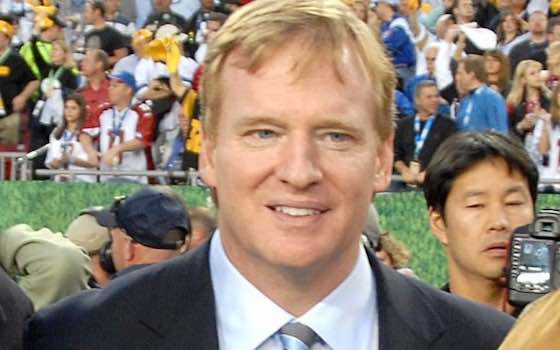 NFL Too Popular To Be Threatened By Anything
Photo: Drew McKenzie (SportsPress NorthWest)

Commissioner Roger Goodell is making the NFL so much money that he doesn't have to care about deflated footballs or any other controversy. Sunday.

"Power tends to corrupt and absolute power corrupts absolutely. Great men are almost always bad men, even when they exercise influence and not authority."

John Emerich Edward Dahlberg (Lord Acton to his close friends) wrote these oft-quoted words in April 1877 in a letter to Archbishop Mandell Creighton. The two were debating how historians should view and write on past matters of corruption within the English hierarchy and the Catholic Church.

They disagreed on the basic premise of the discussion but their dialogue remained cordial with the Archbishop signing one letter, "Although we disagree, I assure you that I remain all about that Acton, boss."

Lord Acton's thoughts on power came to mind this morning as I read Gabriel Sherman's piece in GQ about NFL commissioner Roger Goodell, whose tenure as the President of Pigskin is starting to resemble Bud Selig's long run atop baseball.

Like Selig, Goodell is making his owners money and that's job one, two, and three for a sports league commissioner. Like Selig, his tenure is being marked by a permanently growing list of gaffes, blunders, and poor decisions that's becoming more and more part of the national football discussion. Also like Selig, this series of missteps probably won't amount to anything in the long run.

Some of these goofs have been ineptly comical (fining Marshawn Lynch for grabbing his crotch in the end zone while selling a photo of the same on the league website), some are foolish decisions that invite nasty accusations (attending and having your photo taken at a party at New England Patriots owner Robert Kraft's house the night before the Deflate-gate game), and some are serious enough to be above any joking (the entire Ray Rice fiasco).

One of the first things Goodell dealt with when he became NFL commissioner in 2007 was a series of off-field player misconduct issues. His quick suspensions of Pac Man Jones and Chris Henry for transgressions earned him the title of "new sheriff in town" from then-Falcons cornerback DeAngelo Hall.

But as the years (and problems) have accumulated, Goodell looks less like Andy Taylor and more like Barney Fife. We await sane, rational decisions and instead we get Goodell/Fife metaphorically locking himself in the jail cell time after time.

But here's the thing. In terms of Goodell's future atop the league, nothing will come of this. He makes $44 million a year and he can bumble, stumble and rumble through mistake after mistake because of two big things he has on his side: Us and them.

The "them" in this equation are the 32 NFL owners.

One of the biggest errors we all make in watching any league commissioner exert power or control over a situation is to forget which way the power flows in this relationship. Goodell doesn't run the NFL. Goodell works for the NFL. His robust salary is earned by being at the beck and call of his 32 bosses.

Granted, there are times where he has to administer discipline to one his lords (the Jim Irsay story comes to mind). But even when his hand is forced as it was in the case of Irsay, you can bet Goodell built a consensus among other owners before acting. The idea that any commissioner in any sport acts on any decision unilaterally is far-fetched.

As with most people, he's going to run any big decision by his bosses before he makes it. And make no mistake about it, Goodell's bosses love their employee. He has made them a ton of money as NFL revenues continue to increase on almost all fronts. When you're an NFL owner, and you're lighting your cigars with $100 bills, you're not all that concerned about the league's hypocrisy in the Lynch story, or possible chummy relations between Goodell and Kraft affecting the Deflate-gate controversy, or even the startlingly horrifying attempt at obfuscation that marked the first six months of the Ray Rice story.

Your boy is making you money and if there's an occasional stench from a controversy, just turn on the fan and look the other way.

The "us" in this equation is, well, us. The American sports fan has demonstrated an insatiable appetite for professional football. We watch it, gamble on it, and pay huge prices to attend games. We talk about it, debate it, and pay whatever the cost is to buy merchandise. And nothing that has occurred to this point has done anything to slow down the league's spraying firehouse of popularity.

A significant percentage of football fans think the Patriots were guilty of cheating (again) last week in their win over the Colts. They are disgusted that New England has (again) been caught in a situation that seemed to tilt the playing field unfairly. And what will these people do this Sunday? Don't be silly.

They'll be watching the Super Bowl. And then they'll watch the draft. And the exhibition season. And next season. We love football in this country, open sores and all. Think about it this way: a significant percentage of Seattle fans remain convinced that the Seahawks were hosed by the refs and the league in the 2006 Super Bowl. Nevertheless, there's not been an empty seat at a Hawks game for over a decade now.

Goodell could fly a blimp into the stadium Sunday night, reach out a window, deflect a Russell Wilson pass, then deny the whole thing ever happened and it would have exactly zero impact on next season's

home opener which will be sold out in a newly expanded Century Link Field.

Us and them combine to form a situation where a commissioner's power is about as close to absolute as it gets. He works for 32 of the most powerful people in America while overseeing a sport that has a popularity choke-hold on its fans so thorough that they seem willing to forgive or get over any perceived or real transgression.

The NFL also has its own network and website and has deals with many other media outlets. They are able in many subtle ways to control and manage their message (which is one of the reasons the Ray Rice story took so long to come out).

We'd all feel a little better about the game we love if we thought it was being governed in a little more fair manner. But we love the game so much that in the end, it doesn't matter. We get worked up into a lather about whatever the current controversy is but the league knows that if they wait long enough, there's another game on the schedule. And when that game starts, we'll care about it, and not all the other stuff.

"NFL Too Popular To Be Threatened By Anything