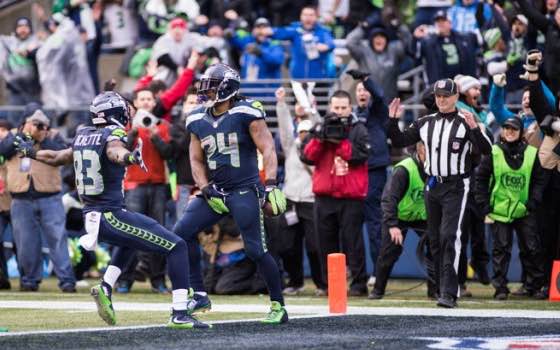 After avoiding interviews the past two seasons, Seahawks RB Marshawn Lynch has succumbed to holding a pair of press conferences.

One was real and done to save money. The other was fake and done to make money. Both were entertaining.

The video is Lynch's "interview" at Super Bowl media day at Phoenix's basketball arena downtown, where he took questions for exactly four minutes, 51 seconds to avoid what reports said was a fine of up to $500,000 by the NFL for repeatedly failing to meet his league-mandated media obligations. Lynch accrued $100,000 in fines for not speaking to the media during the the previous two seasons.

Wearing white stunner shades and a grey and lime-green flat-bill hat, Lynch responded to 29 questions with some variation of the phrase, "I'm here so I won't get fined," before leaving his designated podium. As he exited the arena, fans chimed in with mostly cheers and some boos. Apparently satisfied that he showed, the Pro Football Writers Association of America won't ask the league to fine Seattle's mercurial star running back.

Below is a video ad by Skittles, released Monday, in which Lynch holds a mock press conference from his favorite candymaker where he actually answers questions. The Oaklandnative has a sponsorship deal with Skittles, which he regularly eats on the sidelines during games.

"Would you ever want to hang out with a talking rainbow?"

"If you could live on any planet after you retire from football, what planet would it be?"

"On game day, if you could transport yourself to the field in any way, what would it be: jetpack or blimp?"

"Do you prefer watching cat videos or dog videos online?"