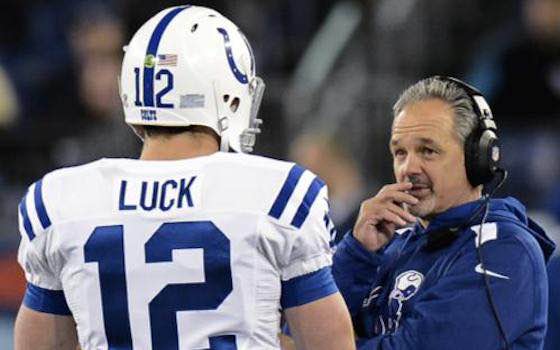 It's Week 14 of the NFL season and only four games remain to decide who advances to the playoffs. And who goes is anyone's guess as 26 teams remain in contention for a trip to Super Bowl XLIX.

"Every win is important," says Seattle Seahawks cornerback Richard Sherman. "You want to get as many wins as you can and put yourselves in position to make a great run in the playoffs. Our team is dedicated, focused and locked in."

With four games to go, there are 21 teams either in or within one game of a playoff spot.

"We've given ourselves the opportunity to play meaningful football in December," says Philadelphia Eagles head coach Chip Kelly. "And in this league, every week is a whole different deal."

As the calendar turns to December, no team has clinched a spot in the 2014 playoff field. In Week 14, the Indianapolis Colts can be the first team to win their division with a win combined with a Houston loss. The Denver Broncos can also secure a playoff berth this week with a victory and some help.

Entering the final month of the regular season, a lot is still to be decided. Some of the key games in Week 14:

Week 14 kicks off on Thursday night when the Bears host the Cowboys at Soldier Field.

Dallas is a perfect 5-0 on the road this season, the best mark in the NFL. The Cowboys have relied on a strong running game, led by DE MARCO MURRAY who tops the NFL with 1,427 rushing yards. Murray has rushed for at least 100 yards in 10 of the team's 12 games this year.

The Bears are still alive in the NFC playoff race and close the regular season with three of their final four games at home. Running back MATT FORTÉ is third in the NFL with 1,478 scrimmage yards and is the only player in the league with at least 800 rushing yards (828) and 650 receiving yards (650).

"We're going to come out and play ball," says Bears defensive end WILLIE YOUNG. "We're going to stick to our game plan against Dallas. It should be a good game."

AFC North rivals meet on Sunday at Cincinnati's Paul Brown Stadium. With four games to play, the Bengals (8-3-1) hold a 1.5-game lead over the other three teams in the division who are all tied at 7-5 (Baltimore, Cleveland, Pittsburgh). The Steelers and Bengals will meet twice over the final four weeks.

Pittsburgh will look to rebound from a 35-32 loss to New Orleans last week. Wide receiver ANTONIO BROWN enters the final month of the season leading the league with 96 catches and 1,258 yards. His 11 touchdown receptions rank second in the NFL.

In Week 13, Cincinnati notched a 14-13 victory at Tampa Bay. The Bengals erased an early 10-0 deficit as quarterback ANDY DALTON rushed for a touchdown and threw a 13-yard scoring strike to wide receiver A.J. GREEN. Cincinnati is 4-1-1 at home this season.

"Any time you get a win, it's big," says Dalton. "The ultimate goal in this league is to win and we'll take a win any way we can get it."

"We have incredibly explosive players all over the field," says Colts quarterback ANDREW LUCK, who leads the league with 4,011 passing yards and joined PEYTON MANNING and Pro Football Hall of Famer DAN MARINO as the only players in NFL history with at least 4,000 passing yards in two of their first three seasons.

Cleveland has won four of its past six games and three of its past four at home. Rookie running backs TERRANCE WEST (502 yards, three touchdowns) and ISAIAH CROWELL (475 yards, seven touchdowns) have combined to rush for 977 yards and 10 touchdowns. Crowell's seven rushing TDs are the most by a rookie this season.

The Seahawks and Eagles are both coming off Thanksgiving Day victories. Seattle won at San Francisco 19-3 while Philadelphia recorded a 33-10 win at Dallas.

Behind LE SEAN MC COY's 159 rushing yards and one touchdown in the win over Dallas, the Eagles took over sole possession of first place in the NFC East. With four games remaining, Philadelphia is in control of the division. McCoy surpassed the 1,000-yard rushing mark (1,018) and wide receiver JEREMY MACLIN reached the 1,000-yard receiving mark (1,088) with 108 yards against the Cowboys.

Two teams in the thick of the AFC playoff race will meet on Sunday night. At 9-3, the Patriots lead the AFC East and are in control for home-field advantage. The 8-4 Chargers are currently the top Wild Card team and sit just one game behind Denver for the top spot in the AFC West. San Diego is in control for a playoff berth.

The Patriots had their seven-game winning streak snapped last week at Green Bay but are still in good position heading into December. By winning out, New England will clinch the No. 1 seed in the AFC and secure a first-round bye for the fifth consecutive season.

The Chargers improved to 8-4 with a crucial 34-33 come-from-behind win at Baltimore. Trailing by 10 points (30-20) with 6:13 remaining, quarterback PHILIP RIVERS led San Diego back. He capped the rally with a touchdown pass to wide receiver EDDIE ROYAL with 38 seconds left in the game.

Week 14 concludes with two division leaders meeting at Lambeau Field. Both teams were victorious in Week 13.

The Falcons enter the final month tied with New Orleans for the top spot in the NFC South. Atlanta, with a Week 16 matchup with the Saints still on the schedule, is in control of the division. Last week, the Falcons knocked off Arizona 29-18 behind a 10-catch, 189-yard performance from wide receiver JULIO JONES, who also scored a touchdown.

Up next is a trip to Green Bay where the Packers are 6-0 this season, outscoring opponents 245-106. Quarterback AARON RODGERS has thrown 360 consecutive pass attempts and 31 touchdown passes in a row at home without an interception, both NFL records. When he takes the field on Sunday, he will have gone more than two years since his last interception at Lambeau Field (December 2, 2012).

Last week, the Packers defeated New England 26-21 and enter the final stretch in sole possession of first place in the NFC North. By winning out, Green Bay will guarantee itself the division title and a first-round bye.

"We're happy about the win," says Rodgers, "but we have some big goals. Everything is still in front of us."