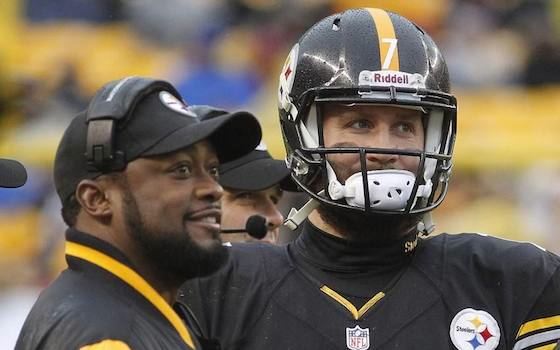 Pittsburgh quarterback Ben Roethlisberger enters Week 10 after becoming the first player in NFL history with six touchdown passes in back-to-back games, joining Pro Football Hall of Famer Y.A. TITTLE (1962) as the only players with multiple six-touchdown games in one season.

In his previous three games, Roethlisberger has thrown 14 touchdowns, tied for the second-most touchdown passes through any three-week span in a single season in NFL history (PEYTON MANNING, 15 touchdowns in 2004).

With four touchdowns this week against the New York Jets, Roethlisberger would set the all-time record for the most touchdown passes in any three-week span in a single season.

The players with the most touchdown passes in a three-week span in a single season in NFL history:

The NFL returns to London as the DALLAS COWBOYS take on the JACKSONVILLE JAGUARS in the third and final installment of the league's 2014 International Series at Wembley Stadium. The contest marks Jacksonville's second visit to London for a regular-season game in as many years, while Dallas will play its first regular-season game outside of the United States.

It's How You Finish

In every NFL season since 1987, at least one team with a .500 or worse record through eight games has advanced to the postseason. Last year, two such teams -- Philadelphia (3-5) and San Diego (4-4) -- accomplished the feat.

Over the past six seasons, 14 teams started 4-4 or worse and rebounded to qualify for the playoffs. Seven of those teams, including the 2013 San Diego Chargers, won at least one playoff game.

The teams in the past six seasons (2008-2013) that started the season at .500 or below through eight games and earned a playoff berth:

The teams that have matched or exceeded their 2013 win totals:

NFL passers have been historically prolific and proficient in 2014. At the season's midpoint, the average of 487.8 net passing yards per game is on pace for the highest average of any season in NFL history (471.2 in 2013).

A look at how the 2014 season is trending historically in three key passing categories -- rating, yards per game and touchdowns per game:

The players with the most sacks per game since 1982 (minimum 40 games played):

In their first season as teammates, Miller has posted nine sacks and Ware has eight sacks, becoming just the eighth pair of teammates to post at least eight sacks each through their team's first eight games.

If Miller and Ware each reach 10 sacks on Sunday at Oakland, they will become just the third pair of teammates to post 10 sacks each through the first nine games of a season since 1982.

The teammates to record 10 sacks each through the first nine games of a season: