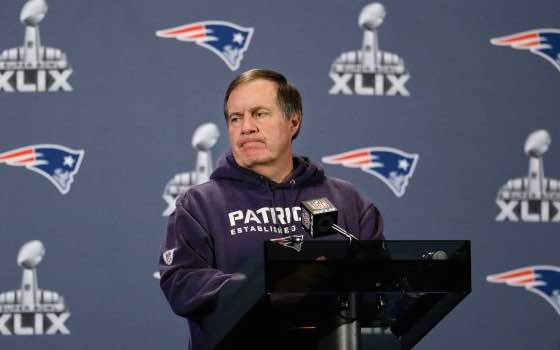 The New England Patriots conducted their first practice since arriving in Arizona for Super Bowl XLIX, a two-hour session on Wednesday that coach Bill Belichick saw as significant for getting his team back on a regular schedule following two days without practices.

"This Wednesday is kind of like a regular Wednesday, tomorrow will be kind of like a Thursday, Friday will be like a Friday," Belichick said. "So we're trying to get back on schedule."

A regular Wednesday practice includes a heavy dose of situational reps, and the Patriots did exactly that while using one of the two grass fields at the Arizona Cardinals training facility on a mild, partly cloudy afternoon with temperatures around 75 degrees.

"There's always things to work on, but we're grinding away," Belichick said.

The Patriots installed the bulk of their game plan for Sunday's game last week while practicing at Gillette Stadium.

"There's a little bit of refining, but it's also practicing closer to the game," Belichick said. "Practicing it two weeks ago and practicing it now, four days before the game, it's more of our normal timeframe."

As expected, the Patriots were at full strength in practice from an attendance standpoint. Center Bryan Stork, who didn't practice when drills began last week while nursing a knee injury, practiced without any apparent setback.

Tom Brady acknowledged early on Wednesday that he's battling a cold, but looked sharp. Belichick isn't worried about his condition.

Said Belichick, "He took all the snaps."

Belichick called the field conditions "great," yet did tweak the environment as music -- rap, rock, hip-hop -- blared for an extended portion of the team drills. Belichick typically pipes in noise to help with concentration and communication, but ease up now.

"In this game, you know, it's kind of a neutral field, so you've got to be ready for it," Belichick said.