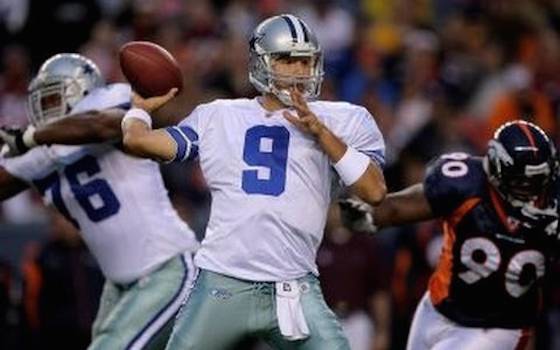 Since 2000, 34 teams have reached the halfway point of their season with a .500 or below winning percentage and proceeded to the playoffs, including at least one in each season.

Of those 34 clubs, five have advanced to the Conference Championship Game, including the 2001 New England Patriots, who won Super Bowl XXXVI.

For the 16th time of their storied careers including the postseason, quarterbacks TOM BRADY and PEYTON MANNING will face off as New England hosts Denver on Sunday afternoon.

Brady (129.1) & Manning (127.4) ranked ranked first and second, respectively, among NFL quarterbacks in passer rating for October, as each player threw 14 touchdowns apiece, marking the first calendar month in NFL history in which two different players passed for at least 14 touchdowns.

Brady, who will make his 200th career regular-season start this week, has already won more games (154) than any other starting quarterback in NFL history through his first 200 starts.

The most wins by starting quarterbacks through 200 regular-season starts in NFL history:

The NFL season enters November on Sunday and three active quarterbacks -- Dallas' TONY ROMO, New England's TOM BRADY and Baltimore's JOE FLACCO -- are among the best in November in terms of winning percentages for the month amongst starting QBs in the Super Bowl era (since 1966, minimum 20 starts).

Romo, who ranks first among the group with an .828 November winning percentage, and the Cowboys will host the Arizona Cardinals on Sunday.

Brady's (.761) and Flacco's (.741) November winning percentages currently rank fourth and fifth, respectively. Brady will aim to improve his November mark on Sunday afternoon against Denver. Flacco and the Ravens will travel to Pittsburgh to face the Steelers on Sunday Night Football.

The quarterbacks with the best records in November in the Super Bowl era (minimum 20 starts):

Note: Ties prior to 1972 did not count in winning percentage.

Indianapolis quarterback ANDREW LUCK has passed for at least 300 yards in each of his past six games, surpassing PEYTON MANNING (five games in 2009) for the longest streak in Colts history.

With at least 300 passing yards against the New York Giants on Monday Night Football, Luck can tie Manning, who passed for 300+ yards in seven consecutive games with Denver in 2012-13, for the third-longest such streak in NFL history.

The players with the most consecutive 300-yard passing games in NFL history:

Luck leads the NFL with 2,731 passing yards this season. With at least 269 passing yards on Monday night, Luck can join TOM BRADY, DREW BREES (twice) and Manning as the only players in NFL history with at least 3,000 passing yards in their team's first nine games to begin a season.

The quarterbacks with the most passing yards through their team's first nine games to begin a season:

Since entering the NFL in 2010, New England tight end ROB GRONKOWSKI leads all NFL players with 49 touchdown catches during that span.

Gronkowski, who will play in his 59th career game on Sunday, needs one touchdown reception against Denver to tie RANDY MOSS for the second-fewest games to reach 50 career TD catches in NFL history. Pro Football Hall of Famer LANCE ALWORTH (54 games) is the fastest player in NFL annals to reach the milestone.

The players to reach 50 touchdown catches in the fewest games in NFL history:

With one touchdown catch against Miami on Sunday, Gates can become the first tight end in NFL history with four seasons with at least 10 TD receptions. He is currently tied with TONY GONZALEZ (three) and New England's ROB GRONKOWSKI (three) for the most such seasons by a tight end in NFL annals.

Thomas, whose Broncos travel to New England on Sunday, needs one more touchdown to join Pro Football Hall of Famer SHANNON SHARPE (1996, 1998) as the only tight ends in franchise history with multiple 10-touchdown seasons. He would be the ninth tight end in NFL history to accomplish the feat.

The tight ends with the most seasons with at least 10 receiving touchdowns: