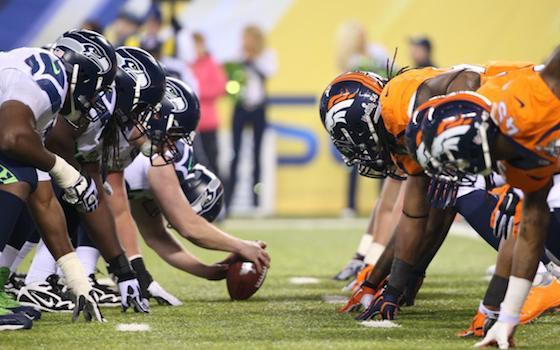 Seven teams are off to strong starts at 2-0: Arizona, Buffalo, Carolina, Cincinnati, Denver, Houston and Philadelphia.

The chances of making the playoffs after a 2-0 start are good but far from a sure thing.

However, with 14 games remaining, there's plenty of time to turn things around. Since realignment in 2002, nearly 60 percent of the playoff teams (59.7 percent, 86 of 144) started the season at either 1-1 or 0-2. That includes five of the eight division champions from last year: Carolina (NFC South), Cincinnati (AFC North), Green Bay (NFC North), Indianapolis (AFC South) and Philadelphia (NFC East).

"It's hard to win every week in this league," says Chicago Bears quarterback Jay Cutler, who threw four touchdown passes as the 1-1 Bears overcame a 17-point deficit to win at San Francisco. "But we really can't dwell on this win. There's a lot of football left, so we just have to keep building on this and get better and better each week."

The Bears are one of three teams to win a game this season after trailing by at least 17 points (Philadelphia in Week 1, Green Bay in Week 2). That's the unpredictability of the NFL. And, since 1990, at least four clubs have made the playoffs each season that were not in the postseason the previous year. Will that streak continue in 2014?

Here's a look at some of the key showdowns in Week 3:

The Chargers evened their record at 1-1 with a 30-21 win over the defending Super Bowl champion Seattle Seahawks last week. Quarterback PHILIP RIVERS threw three touchdown passes to tight end ANTONIO GATES to lead San Diego to victory. Gates, who now has 90 career touchdown catches, moved into 11th place on the NFL's all-time list and is second amongst tight ends.

"Philip trusted me to make the plays," says Gates about Rivers. "I can't say enough about him and my teammates. They continued trusting me to make those plays. My main focus is just to try and help us win football games every Sunday."

The Bills are 2-0 after last week's 29-10 win over Miami. Buffalo's C.J. SPILLER returned a kickoff 102 yards for a touchdown and became the first player in more than 40 years to record a 100+ yard kickoff-return touchdown and a 45+ yard run in the same game (BOB GRESHAM, September 23, 1973). Rookie wide receiver SAMMY WATKINS, Buffalo's first-round pick, had eight catches for 117 yards and a touchdown, his first career 100-yard game.

"We're off to a great start," says Spiller about the team's 2-0 record. "Any time you can win in this league, it's always great. But now the focus is on the Chargers."

The Ravens kicked off Week 2 with a commanding 26-6 win over the Pittsburgh Steelers on Thursday night. Baltimore forced three turnovers and had a +3 turnover differential on the night. Ravens quarterback JOE FLACCO threw two touchdown passes to pace the offense.

"I feel like when you get one turnover, they come in bunches," says Baltimore safety MATT ELAM. "That's a great momentum shifter. If we can continue to do that, we'll be a great team."

Browns quarterback BRIAN HOYER directed an 85-yard drive to set up BILLY CUNDIFF's game-winning field goal with three seconds remaining as Cleveland defeated the New Orleans Saints 26-24. Hoyer completed eight of 11 passes for 78 yards on the final drive, moving the Browns from their own four-yard line to the New Orleans 11.

"I couldn't be more proud," says Cleveland head coach MIKE PETTINE about his team. "There were a lot of times during that game we could have just let it slip away. But we battled back. This game is about making plays."

The 49ers will look to bounce back after a 28-20 loss to the Chicago Bears. San Francisco has won the past four games in the series and quarterback COLIN KAEPERNICK is 3-0 as a starter versus Arizona with a 106.4 passer rating.

"This is the NFL and you're going to lose games," says San Francisco safety ERIC REID. "But we've just got to get back out there this week and play again. We're looking ahead to our next game."

"We now understand how to win ballgames," says Arizona cornerback PATRICK PETERSON. "We know how to finish out the fourth quarter. That's what it's all about. This was a great team win."

For only the sixth time, the regular season will feature a rematch of the previous Super Bowl. The Broncos, who improved to 2-0 with a 24-17 win over Kansas City, will look to avenge last year's 43-8 loss in Super Bowl XLVIII.

"This is what we've been waiting for," says Denver wide receiver ANDRE CALDWELL.

Broncos quarterback PEYTON MANNING threw three touchdown passes last week and has six touchdowns and no interceptions so far this season. Meanwhile, Seattle quarterback RUSSELL WILSON has four touchdowns without an interception in 2014 and had two TDs and no turnovers in the Super Bowl victory.

"This is going to be a challenging game facing Peyton Manning and the Denver Broncos," says Wilson, whose team has won 18 of its past 19 home games, including the playoffs. "They're a very good football team."

The Steelers aim to rebound from a Week 2 defeat at Baltimore. Pittsburgh quarterback BEN ROETHLISBERGER is 2-0 in his career against the Panthers and needs 313 passing yards to reach 35,000 for his career.

"It's a marathon, not a sprint," says Steelers cornerback IKE TAYLOR about the team's 1-1 record and the long NFL season. "We do have to get better overall. As a group, we have to look back and correct the mistakes."

Carolina, which has won eight consecutive regular-season games at home, extended that streak with a 24-7 win over the Detroit Lions in Week 2. Linebackers THOMAS DAVIS (12 tackles) and LUKE KUECHLY (11) led the way for the defense, which has allowed only 21 points this season (10.5 per game).

"We have to defend our home field," says Davis. "That's what we did last week and that's what we'll try to do."

In Week 2, both the Bears and Jets were involved in dramatic comebacks. Chicago erased a 17-0 deficit to defeat the San Francisco 49ers 28-20. New York, however, watched the Green Bay Packers come back from a 21-3 hole as the Jets dropped a 31-24 decision at Lambeau Field.

"The defense did a great job of giving us short fields and keeping it close enough so that we could get back in it," says Bears quarterback JAY CUTLER, who threw four touchdown passes in the comeback win, including three to wide receiver BRANDON MARSHALL.

"We did a lot of good things but it's all about winning," says Jets quarterback GENO SMITH, who has two passing touchdowns and one rushing TD in 2014. "We've got to get better and we've got areas to improve on. I trust my teammates and coaches and know that we're going to prepare hard this week to go out and win on Monday night."