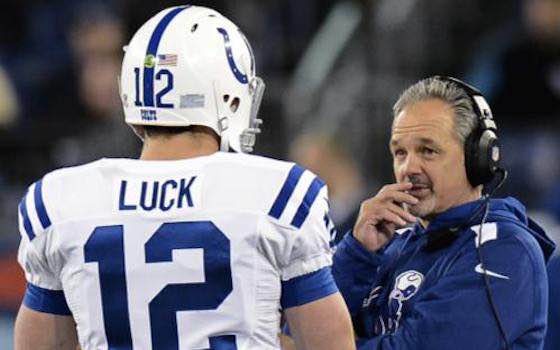 "The message is pretty much the same for everybody," says New England head coach BILL BELICHICK about playing the postseason. "We all know that this is single elimination and you put everything you have into it. There's nothing to save it for, nothing to hold back. You compete with all you've got. I think that's true for everybody. This should be the best we all have."

Week 17 came right down to the wire as 10 of the 16 games played on the final day of the regular season had playoff implications. Sunday's excitement was due in part to having 16 divisional games played on the season's final day, a tradition instituted in 2010. And four divisions were decided on the last day of the regular season, including the AFC North in game No. 256 of 256 as Pittsburgh defeated Cincinnati.

"Now everybody is 0-0," says Arizona Pro Bowl cornerback PATRICK PETERSON. "It is a fresh season. We can't wait to start this postseason."

The NFL playoffs, which conclude on February 1 with Super Bowl XLIX at University of Phoenix Stadium, begin this Saturday and Sunday with Wild Card Weekend.

"We're excited about being in the playoffs," says Dallas head coach JASON GARRETT. "This is what we worked for. Winning the division is the first goal and now we've got the opportunity to play in the playoffs. Now it's time to take advantage of it."

The Cowboys are one of five new teams in this year's playoff field, joining Arizona, Detroit, Pittsburgh and Baltimore. Since the 12-team playoff format was adopted in 1990, at least four teams have qualified for the playoffs that were not in the postseason the year before.

A look at the four games on Wild Card Weekend:

Arizona tied a franchise record with 11 wins and has won 21 games under BRUCE ARIANS, the most wins by a Cardinals head coach in his first two seasons with the club. Arizona has won four of its past six postseason games, including a 33-13 win at Carolina in the 2008 playoffs (January 10, 2009).

"It's a whole new season now," says Arians about the postseason. "We're all 0-0 and we're in the tournament. We're going to get ready for this playoff game. We're not planning on being one-and-done."

Carolina enters the playoffs on a four-game winning streak, outscoring opponents 111-43. Under head coach RON RIVERA, the Panthers have won back-to-back division titles, clinching the NFC South with a commanding 34-3 win at Atlanta last week. In December, the Panthers ranked second in the NFL in rushing offense (199.3 yards per game) and points allowed (10.8 points per game).

"We put ourselves in this position by playing the way we did in December," says Rivera about advancing to the postseason. "We've won the NFC South two years in a row and that's something to build on as we move forward as a football team."

AFC North rivals Baltimore and Pittsburgh will meet on Saturday night at Heinz Field. The Ravens qualified for the postseason with a 20-10 win over Cleveland combined with a San Diego loss in Week 17 while the Steelers clinched the division title with a 27-17 win over Cincinnati in the regular-season finale.

"Anything can happen when you get into the playoffs," says Ravens quarterback JOE FLACCO, who guided Baltimore to a Super Bowl title in 2012 as the No. 4 seed.

"Hopefully the journey is not over," says Roethlisberger. "We're still going."

The Bengals have won five of their past seven games and are in the playoffs for the fourth consecutive season under head coach MARVIN LEWIS.

"At the end of the day, there are only so many teams that get this opportunity," says Cincinnati tackle ANDREW WHITWORTH about the playoffs. "It doesn't matter what your record is anymore. It doesn't matter where you're seeded. All that matters is if you win."

The Colts have won nine of the past 12 AFC South division titles. In Week 7, quarterback ANDREW LUCK threw two touchdown passes as Indianapolis shut out Cincinnati 27-0. Luck led the NFL with 40 touchdown passes and was named to the Pro Bowl for the third time in his first three seasons.

"It's one-and-done now," says Colts head coach CHUCK PAGANO about the postseason. "We all know the stakes get higher and it's single elimination. Whatever we have to do to win a game, that's what we're going to do. We're going to do whatever it takes."

The Lions will look to slow down Dallas' running game, which ranked second in the NFL (147.1 yards per game) and is led by Pro Bowl running back DE MARCO MURRAY, who set a franchise-record with 1,845 rushing yards.

"Controlling the line of scrimmage is important," says Detroit head coach JIM CALDWELL, who tied a franchise record with 11 wins in his first season with the club. "Our defense has been really strong in that area throughout the year."

Both teams have dynamic quarterback-wide receiver combinations: Detroit's MATTHEW STAFFORD-to-CALVIN JOHNSON and Dallas' TONY ROMO-to-DEZ BRYANT. Johnson had a franchise-record 329 receiving yards in the last game against the Cowboys -- the second-best single-game total in NFL history -- and recorded 211 yards in his only postseason contest. Romo led the NFL with a club-record 113.2 passer rating and Bryant's 16 receiving touchdowns were a team record and topped the league.

"We're just getting started and we're excited about the opportunity in front of us," says Romo about the postseason.