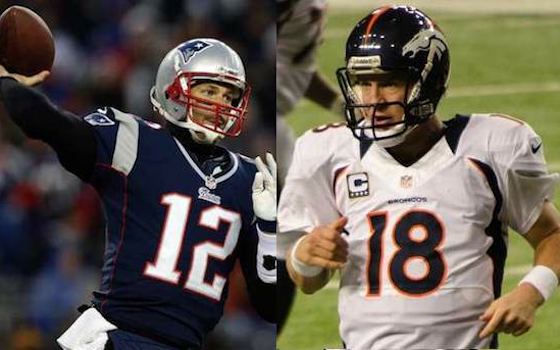 For the 16th time of their storied careers, Peyton Manning will face Tom Brady as the the Denver Broncos (6-1) and New England Patriots (6-2) -- the top two teams in the AFC -- meet in Week 9.

"I always look forward to this matchup and every one of them is a classic," says NFL Network analyst and former head coach STEVE MARIUCCI. "I hope football fans enjoy this because who knows how many more times these great quarterbacks will face off against each other."

Brady owns a 10-5 career record against Manning and has won three of the past four games against his rival, but the Broncos earned a 26-16 victory over the Patriots in the most recent match-up against the Patriots in last year's AFC Championship Game. This game marks the 14th consecutive meeting in which Brady's and Manning's teams both have records of .500 or better heading into the contest.

Brady, now in his 15th season, and Manning, a 17-year veteran, are two of the three winningest quarterbacks in NFL annals. Manning ranks second in NFL history with 173 wins, while Brady's 154 wins are the third-most ever among starting quarterbacks. Only BRETT FAVRE (186) has more career victories.

Sunday's game marks the first in NFL history in which two starting quarterbacks with at least 150 career regular-season wins apiece will face off.

The most regular-season wins as a starter in NFL history:

Brady, who will make his 200th career start in Week 9, already has more wins than any quarterback (154) in his first 200 career starts, far surpassing the previous record set by Manning (136 wins).

Both players rank among the NFL's all-time leaders in many statistical categories. Manning recently surpassed Favre for the most touchdown passes in NFL history. Brady (51,208) needs 268 passing yards against the Broncos to surpass Pro Football Hall of Famer JOHN ELWAY (51,475) for No. 5 on the all-time list.

Here's a look at the career regular-season and postseason totals of Brady and Manning and where they rank all-time: