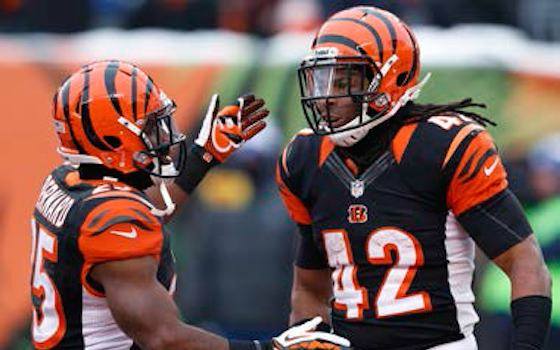 The first quarter of the NFL season is over and 24 of the league's 32 teams (75 percent) are currently either in first place or within a game of the top spot in the division. But there's a lot of season left to be played.

And all 32 teams know there's room for improvement. And, while not every club has gotten off to a hot start, nothing is a given in the NFL.

That's the unpredictability of the NFL. So entering Week 5, while it certainly helps to be near the top of the standings, don't count anyone out.

Some of the key NFL games this weekend:

The 3-0 Bengals have allowed a league-low 33 points and 11.0 points per game. Cincinnati is the only team in the league to allow 16 points or fewer in every game. Offensively, quarterback ANDY DALTON has a 95.4 passer rating and the team has three players with 12 receptions each -- wide receivers A.J. GREEN (233 yards) and MOHAMED SANU (164) and running back GIOVANI BERNARD (148).

"This is nothing more than a good first quarter," says veteran tackle ANDREW WHITWORTH. "You can't let up. October is a month for adjustments. Teams begin to find out who they are. October is a big month."

Texans defensive end J.J. WATT returned an interception 80 yards for a touchdown in Houston's 23-17 win over Buffalo. Trailing 10-7 in the third quarter, Watt changed the momentum of the game by picking off a pass and returning it 80 yards for a score. It marked his second career interception-return touchdown and the first in the regular season. He is the only player in NFL history with at least 35 sacks (38.5), an INT-TD and a touchdown reception in his first four seasons.

"It was just a great play," says Houston head coach BILL O'BRIEN about Watt's INT-TD. "It really turned the game, no question about it. He's a very instinctive, great player."

Behind the strong play of running back DE MARCO MURRAY, the Cowboys are off to a 3-1 start for the first time since 2008. Murray, who leads the league in rushing with 534 yards and five touchdowns, is just the fourth player in NFL history to start a season with at least 100 rushing yards and a rushing touchdown in each of his team's first four games.

"I have to give credit to the offensive line," says Murray. "We're all on the same page. They make it a lot easier for me."

The Ravens have won three in a row, including last week's 38-10 win over Carolina. Wide receiver STEVE SMITH, SR. had seven catches for 139 yards and two touchdowns. He has 429 yards this season, the most ever by a player 35 years old or older through the first four games of a season. Smith, who is the Panthers' all-time leading receiver with 12,197 yards, is only the second player in NFL history (TORRY HOLT) to have a 100-yard performance in his first game against a franchise for which he had at least 10,000 receiving yards.

"I was ready to play ball once I was out there," says Smith about facing his former team.

Indianapolis has won two consecutive games and the Colts have scored at least 40 points in each. Quarterback ANDREW LUCK completed 70.7 percent of his passes (29 of 41) for 393 yards with four touchdowns and one interception for a 123.3 passer rating in last week's 41-17 win over Tennessee. The previous week in a 44-17 win over Jacksonville, Luck completed 31 of 39 passes (79.5 percent) for 370 yards with four touchdowns and no interceptions for a 140.4 passer rating. He is the first player in NFL history to post consecutive games with at least 370 passing yards, four or more touchdown passes, a completion percentage above 70 percent and one or no interceptions.

"We're blessed with a bunch of great playmakers, guys that need the ball in their hands," says Luck. "As a quarterback, that's what you want."

For just the third time since the 1970 merger, the Cardinals posted an undefeated record in September (1974, 2012). Arizona has allowed just 45 points in three games and leads the NFC in points allowed per game (15.0). In the fourth quarter, the Cardinals have yet to allow a single point, outscoring opponents 30-0.

Denver quarterback PEYTON MANNING has thrown eight touchdown passes in three games this season and enters this week's game just one shy of 500 for his career. Manning is on the verge of joining BRETT FAVRE (508) as the only players in NFL history with 500 touchdown passes.

"I'm just happy I get to catch some of them," says Broncos wide receiver DEMARYIUS THOMAS. "Because you know most of those are going to be touchdowns in games you win. They're going to be plays that mean something for us."

The Seahawks have won eight consecutive games on Monday night and quarterback RUSSELL WILSON is 3-0 with seven touchdowns, no interceptions and a 121.6 rating on Mondays. This season, Wilson's 108.9 passer rating ranks third in the NFL and Seattle is 19-3 (.864) when he has a rating of at least 100 (including the playoffs).

Washington linebacker RYAN KERRIGAN ties for the NFL lead with five sacks and since entering the league in 2011, is one of only two players (JASON PIERRE-PAUL) with at least 25 sacks and two interception-return touchdowns. Washington wide receiver DE SEAN JACKSON has scored five touchdowns (four receiving, one rushing) in his past six Monday night games, averaging 62.8 yards per TD.