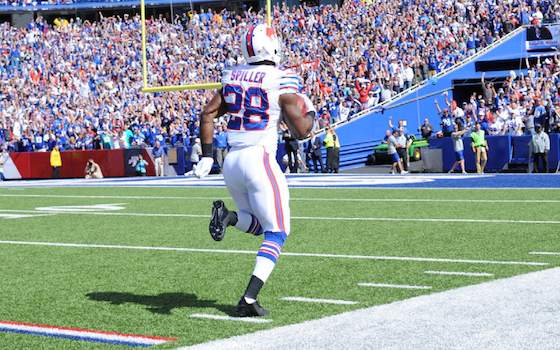 "Every coach preaches that special teams are one-third of the game," says former NFL offensive lineman and current NFL Network analyst Brian Baldinger. "When you pay it off with either a blocked field goal for a touchdown or a kick return for a touchdown, it verifies exactly what every coach has been preaching to their team each and every day about the importance of special teams."

With the Buffalo Bills holding a 9-3 lead in the third quarter of the their home opener against the AFC East rival Miami Dolphins, running back C.J. Spiller scored the game's first touchdown on a 102-yard kickoff return. Buffalo went on to win by a score of 29-10 and improved to 2-0.

Spiller, who also had a 47-yard run in the third quarter that helped set up another Buffalo touchdown, became the first NFL player with a 100-yard kickoff-return touchdown and 45+ yard run in the same game since 1973 (Houston Oilers running back BOB GRESHAM, September 23, 1973).

"I think he's very dangerous back there (as a returner)," says Bills head coach Doug Marrone of Spiller, who also had a 95-yard kickoff-return touchdown as a rookie in 2010. "That's how we're going to have to win; by playing well in all three phases. Special teams, really for the last two weeks, have done a heck of a job."

Trailing the New England Patriots 17-7 in the waning moments of the first half, Minnesota lined up for a 48-yard field-goal attempt that would have brought the Vikings within seven points. But defensive end CHANDLER JONES blocked the kick and returned it 58 yards for a touchdown to give the Patriots a 24-7 lead heading into halftime en route to a 30-7 win, improving to 1-1.

"Chandler really made a good play because he flattened down the line of scrimmage," says New England's BILL BELICHICK, who on Sunday became the sixth NFL head coach to win 200 regular-season games. "He's obviously a really athletic guy. He has good length and was able to get up and then made a real good play after that to scoop and score and turned it into really a 10-point play -- three off the board and gave us a chance to pick up seven. That was obviously a huge play in the game."

Since realignment in 2002, NFL teams have a 244-157 (.608) record in games in which they scored a return touchdown on a kickoff, punt, blocked punt or blocked field goal.

"I think those kinds of touchdowns gives the entire team a lift," says Baldinger. "When you can take the pressure off of your defense or get back into a game or open up a game because of a special teams turnover, it just adds momentum. It's harder for an opponent to overcome when you get that."

NFL teams with the most combined kick-return and blocked kick/punt-return touchdowns since 2002: