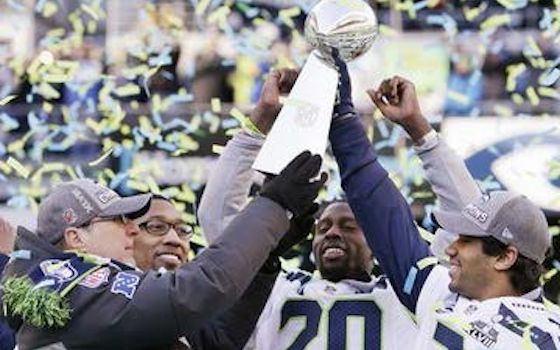 The Seattle Seahawks won the first championship in franchise history last season with a 43-8 victory over the Denver Broncos in Super Bowl XLVIII.

"This is an amazing team," says Seattle head coach Pete Carroll, who became the third-oldest head coach to win a Super Bowl (62 years, 140 days). "These guys would not take anything but winning the Super Bowl."

The Seahawks clinched the top seed in the NFC with a 13-3 regular-season record, which included a 7-1 mark at home. Seattle won its eighth division title in franchise history and the team's 13 wins tied the team mark.

"This is the best football team in America," said President Obama during a ceremony at The White House to honor the Super Bowl champions. Seattle's defense led the NFL in points allowed (231), total defense (273.6 yards per game), passing defense (172.0 yards per game), takeaways (39) and interceptions (28) and the club's +20 turnover differential was the best mark in the league.

"Defense wins championships," says Seahawks safety Kam Chancellor, one of the members of Seattle's vaunted "Legion of Boom" secondary. "And you can say that now."

"This team is all about making history," says Thomas. Thomas had 100 tackles, five interceptions and two forced fumbles last year, the first NFL safety in more than a decade to post those numbers in a single season.

Sherman led the league with eight interceptions in 2013 and his 20 INTs since entering the league in 2011 are the most by any player during that span.

"We etched our names in the record books," says Sherman about Seattle's historical season.

Wilson, who was a third-round pick by the Seahawks in the 2012 NFL Draft, became only the fourth quarterback to win a Super Bowl in his first or second season in the league. He joined Kurt Warner, Tom Brady and Ben Roethlisberger as the only QBs to accomplish the feat.

He is also the only player in NFL history to record a 100+ passer rating in both his rookie and second season.

"It's a true blessing," said Wilson about his team after winning the Super Bowl. "We believed we would get here. We wanted to win it all and we just told ourselves we had to go 1-0 each week. That was our mentality throughout the whole season. We continued to fight. We continued to grow together. We have great teammates and I couldn't have done it without these guys."

But can the Seahawks repeat?

Super Bowl Trophy by the Numbers

After the trophy is presented, it is then returned to Tiffany & Co. for any repairs and the engraving of the Super Bowl team names and the final score onto the base. It then goes back to the winning team for permanent possession.

The particulars of the Vince Lombardi Trophy: