Seahawks and the Outlaw Balls of XLIX 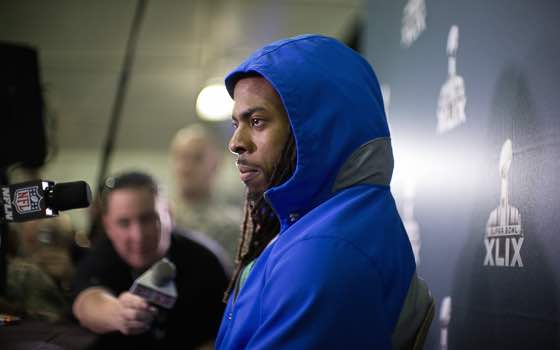 Seahawks and the Outlaw Balls of XLIX

The Seahawks arrived in Phoenix after a memorable sendoff, and Richard Sherman further inflamed Deflate-gate by questioning the commissioner's objectivity.

The theme of this year's Super Bowl, now including the Seahawks' uproarious departure as well as their blunt-spoken arrival, is plain: Outlaw balls. And that isn't just the Patriots' equipment malfunction.

As thousands of 12s swarmed the route of the Seahawks buses through the city of SeaTac on the way to the airport Sunday morning -- "Instead of having the game in the stadium, it was in the street today," said DT Michael Bennett -- one curbside family stood out: Mom, Dad and two little ones holding their crotches.

"The more they fine him, the bigger he gets," said one who was aboard the three Seahawks buses, referring to RB Marshawn Lynch and his his now-famous gesture, certain to sweep America from playgrounds to boardrooms now that the NFL threatens to eradicate it by game penalties as well as fines.

Lynch's celebration of defiance is a balls-out challenge to the NFL's sense of propriety and decorum, particularly with the global TV audience tuning in Sunday, many of whom are -- gasp! -- children. Let us all protect them, otherwise they might grow up to be -- ahem -- adults.

After the Seahawks' arrival at their sumptuous resort hotel, challenges to the NFL's version of decency continued. At a tent-covered press conference in a parking lot, CB Richard Sherman deflected questions about the consequences of Deflate-gate on the Seahawks with world-weary boredom until he was asked about whether a just outcome of the brouhaha was possible with commissioner Roger Goodell and Pats owner Robert Kraft such good personal friends.

"Will (the Pats) be punished? Probably not, not as long as Robert Kraft and Roger Goodell are still taking pictures at their respective homes. He was just at Kraft's home before the AFC championship. You talk about conflict of interest.

"It won't affect them at all. Nothing will stop them."

As is often the case, Sherman cuts to the heart of the matter. The issue is less about the trifle of a slightly deflated football that would favor Pats QB Tom Brady, and more about what the NFL will to do to a repeat violator of sports ethics.

Now that NFL has confirmed 11 of the 12 football assigned the Pats were deflated, and Brady and coach Bill Belichick were steadfast in denying knowledge and involvement, the NFL has a mess -- and a massively easy subject of mockery -- on the threshold of its showcase.

As with the Ray Rice episode that ignited a national discussion of domestic violence, the sports world looks now to see how the most corporate of empires handles an episode of potential cheating by its most successful franchise, one owned by perhaps Goodell's staunchest ally among the owners.

As to whether the episode will impact the game, only a highly unlikely game suspension would do that. Although Belichick admitted Saturday he was "embarrassed" by the hours he has had to spend on Deflate-gate, meaning he's behind his Seattle counterpart and Patriots coaching predecessor, Pete Carroll. That could prove a distinct, but unprovable, advantage.

Nor did Belichick do himself any favors with his clumsy attempt at explaining the "science" of ball deflation. None other than Seattle's own comic scientist Bill Nye, "The Science Guy," called him out during a segment of ABC's Good Morning America.

There are, however, those who are having none of this discussion, chief among them Bennett, the ever-witty D-lineman.

"I think it's all propaganda, just to get a chance to build the game up," he said Sunday afternoon. "It's all inflating the game right now . . . (trying) to make it even more worth it than what it's really about.

"It's really just about us, two great teams, playing. I think a lot of people are shying away from that aspect of it. The Patriots are arguably one of the best teams of this decade, and we're starting to try to catch up to where they're at, and what they've done in the last 10 years. Belichick is one of the best coaches of all time. I think people are forgetting that -- the coaches coaching and the players playing. It's too much about the balls."

All quite true, but nothing in American culture, even in world culture, is like the Super Bowl. When kidlets are curbside on a Sunday morning clutching their nethers in public celebration, with parental support, there is a phenomenon afoot that is harder to explain than Packers coach Mike McCarthy's game plans.

"Seahawks and the Outlaw Balls of XLIX