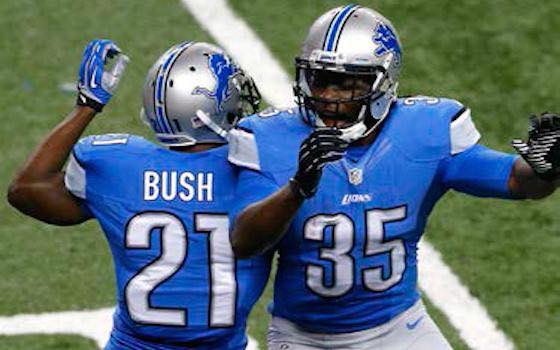 Week 13 features a Thanksgiving tripleheader for the ninth consecutive season. Traditional competitors Detroit and Dallas will host games during the day followed by a primetime nightcap on NBC between the Seattle Seahawks and San Francisco 49ers.

The Thanksgiving Day records of the teams playing this Thursday:

"We'll take the win, but we have a lot to work on," says Bears head coach Marc Trestman. "We are excited to move forward to Thursday and a Thanksgiving game at Detroit."

"I think it is good we have a short week," says Stafford. "We have a chance to go out and play again on Thursday against a familiar opponent and on a national stage."

Detroit hosts Chicago on Thanksgiving for the first time since 1999.

The players with the most career touchdown catches on Thanksgiving:

First place in the NFC East is on the line when the Eagles visit the Cowboys in the second game of the NFL's Thanksgiving tripleheader.

The Cowboys play in the first of two consecutive Thursday games (Week 14 at Chicago Bears, December 4, 2014) following a 31-28 victory against the New York Giants on Sunday Night Football.

Dallas quarterback TONY ROMO passed for 275 yards with four touchdowns for a 143.4 passer rating in the come-from-behind victory. With 3:00 remaining in the fourth quarter, Romo led a seven-play, 80-yard drive capped off by a 13-yard touchdown pass to wide receiver DEZ BRYANT.

"Now we have another challenge coming up real quick on Thanksgiving Day," says Romo. "Philly is playing great football so we're going to have to play better than we did tonight to win that game."

Romo has led the Cowboys to six wins in seven Thanksgiving starts. For his career, Romo has passed for 2,033 yards and an NFL-record 18 touchdowns on Thanksgiving.

The most career passing yards and touchdown passes on Thanksgiving Day:

Tight end JASON WITTEN, who will play in his 12th Thanksgiving Day game this week, is currently the all-time leader on Thanksgiving with 65 catches. His 732 receiving yards trails only HERMAN MOORE (834) for the most all-time on Thanksgiving.

The most career receiving yards on Thanksgiving Day:

The Philadelphia Eagles enter Week 13 following a 43-24 win against the Tennessee Titans.

"It's a big one," says tight end BRENT CELEK, who has played in 14 career regular-season games against Dallas. "It's going to be big for them and big for us. I'm excited. Playing on Thanksgiving, everyone is watching, Cowboys against Eagles - it doesn't get much better than that."

The Seahawks enter Week 13 following a 19-3 win against the Arizona Cardinals.

"Our team played really well in the win," says Seahawks head coach PETE CARROLL. "We have to turn around in a hurry. Hopefully we can put together another good performance this week against a very tough divisional opponent."

In his third year, Seattle quarterback RUSSELL WILSON has won 20 of his first 22 career starts at home in the regular season. That is tied for the fewest starts (22) needed to reach 20 regular-season wins at home among quarterbacks who began their careers in the Super Bowl era. The other three quarterbacks to accomplish the feat are MATT RYAN, MARC BULGER and DANNY WHITE.

Wilson heads into this week's matchup having won his past two starts in Thursday games, passing for five touchdowns with no interceptions for a 116.6 passer rating. Including the postseason, Wilson has also led the Seahawks to victories in three its past four games against San Francisco.

The 49ers aim for a fourth consecutive victory after a 17-13 victory over Washington.

"I think this is something to continue to build off of," says 49ers safety ANTOINE BETHEA. "This string of victories has been great and will pay big dividends for us. Now we have a short week against a great team coming into our house on Thanksgiving."

Kaepernick's career regular-season numbers as a starter against the NFC West:

1st Thanksgiving game since 2008 (at Dallas)