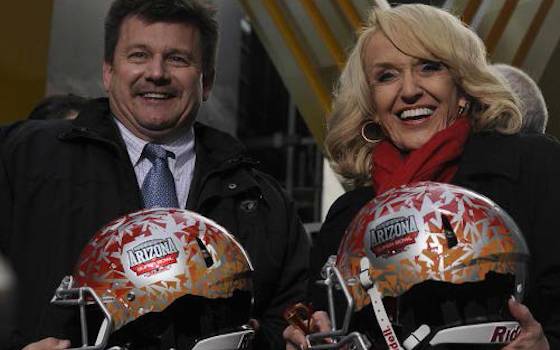 University of Phoenix Stadium will host the Pro Bowl on January 25, 2015 and Super Bowl XLIX on February 1, 2015, marking the third time both the Pro Bowl and the Super Bowl will be played in the state.

"I think it will be huge," says Arizona Cardinals president Michael Bidwill. "The Super Bowl is going to be so much bigger in 2015 than it was in 2008 with all the new events that have been created since Super Bowl XLII. Now being able to stack on the Pro Bowl, it's going to be fantastic. I remember back in 2008 how electric the town was and how much fun it was to host the game and all the different activities. This is going to be great for Arizona, the tourism industry and for football fans because we are going to get a chance to see two great games back-to-back."

The 2015 Pro Bowl will be the sixth consecutive All-Star game played prior to the Super Bowl.

The 2014 Pro Bowl featured a significantly revised format that will continue this year. For the first time, the Pro Bowl was "unconferenced," and several key playing rules were changed. Rather than the familiar AFC vs. NFC match-up that had existed since 1971, players were selected without regard to conference in voting by fans, coaches and players.

Several major initiatives will take over 12 city blocks in downtown Phoenix and together will serve as the hub of fan, sponsor, media and NFL activities. The activities will cover 5th Street to First Avenue and Jefferson Street to Monroe Street and be anchored by the iconic Super Bowl roman numerals, which will tower 30 feet into the air.

Super Bowl Central will feature live performances by national recording artists and local musical talent, community groups and schools, football-themed activities, and beer and wine gardens. The festival will feature family-friendly activities for fans of all ages, will be free to the public and incorporate street level merchants and restaurants. Local culture and food will be showcased.

This is a new addition to Arizona's line-up of Super Bowl activities since the state last hosted the Super Bowl in 2008, and one million visitors are expected to participate.

"Super Bowl Central, along with NFL Experience and NFL House, will turn downtown Phoenix into the Super Bowl epicenter," says Phoenix Mayor GREG STANTON. "It will provide both local and visiting fans an amazing opportunity to be part of this global event. Super Bowl Central delivers direct economic benefits to local businesses."