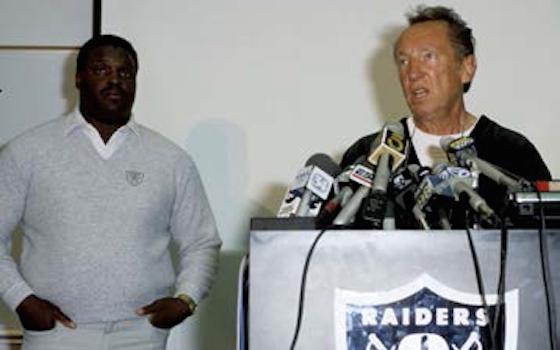 In 1989 Art Shell was named the NFL's first African-American head coach since Fritz Pollard coached the Akron Pros in 1921.

Shell was promoted from offensive line coach to head coach on October 3, 1989 by the Los Angeles Raiders four games into the season after a 1-3 start. Shell went on to lead the Raiders to a 7-5 record over the final 12 games of the year, including a perfect 6-0 mark at home.

When introducing Shell as the team's new head coach, the late Raiders owner Al Davis remarked that he "represents pride and poise and has always had quality, self esteem and dignity."

In his first full season as head coach in 1990, Shell led the Raiders to a 12-4 record and captured the AFC West title.

He compiled a 56-41 record as the team's head coach through the 1994 season, earning three playoff berths, including a trip to the 1990 AFC Championship Game.

He enjoyed a stellar 15-year playing career (1968-82) as a Pro Bowl offensive tackle for the Raiders, winning two Super Bowls, and was inducted into the Pro Football Hall of Fame two months prior to being named the Raiders head coach.

Shell says the increase of minority coaches around the league and the success stories among minorities in the head coaching ranks have been gratifying.

"The league is now at the point where people are looking beyond the color and are looking at the coach," says Shell. "Can this guy coach? That's the main thing. I think the Rooney Rule has really helped a lot. It shows what people can do if given an opportunity." A year-by-year look at the number of NFL minority coaches since 2000 (total includes head coaches, coordinators and assistant coaches), compared to the number in 1980: