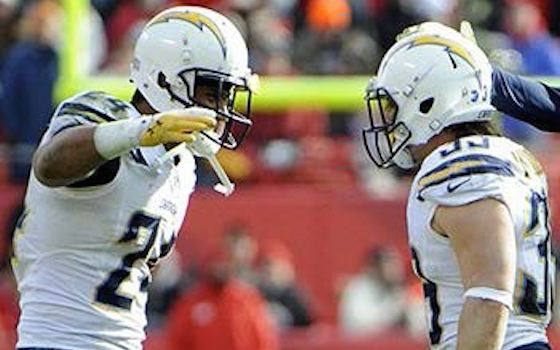 Last season, 14 NFL temas boasted two running backs with at least 400 rushing yards apiece, including six playoff teams -- Cincinnati, Denver, Indianapolis, Green Bay, New England and San Diego. Despite the proliferation of the passing game, teams have continued to rely on different options in the backfield to gain an advantage.

"I think you see most teams in the league using multiple running backs," says Patriots head coach Bill Belichick. "It's a tough position to play and you've got everybody after you when you have that ball. So to have multiple guys that can do it and spread the load a little bit, then you just have a fresher guy who's stronger, fresher and ready to go on every down."

The Chargers would agree. Led by the versatile duo of Ryan Mathews and Danny Woodhead, San Diego had the sixth-best rushing attack in the AFC at 122.8 yards per game and won five of its last six games to earn a playoff berth. Mathews finished the season second in the AFC with 1,255 rushing yards while Woodhead added 429 yards of his own.

"We always play with a couple of backs, it doesn't matter who's in there," says Chargers head coach Mike McCoy. "Keeping them fresh, that's the big thing. Play the hot hand while you roll."

San Diego was one of three playoff teams (Denver and Green Bay) that got a little extra from its running back tandem. Each team boasted a backfield with one running back that gained at least 1,000 rushing yards and a second back who amassed at least 400 yards. Denver's rushing attack was led by Knowshon Moreno (1,038) and Montee Ball (559) on the way to an appearance in Super Bowl XLVIII. Aided by the combination of Associated Press Offensive Rookie of the Year Eddie Lacy (1,178) and veteran James Starks (493), the Packers won the NFC North title.

"We have multiple guys who can run the ball effectively," says Green Bay quarterback Aaron Rodgers. "Eddie and James have done good things and the offense is better with them running well."

The teams that employed two running backs with at least 400 rushing yards each in 2013: