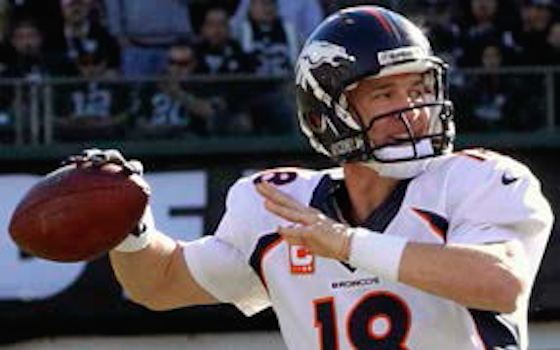 2013 was the Year of the Quarterback.

"It's a quarterback's league now," says CBS analyst and Pro Football Hall of Fame quarterback Dan Fouts. "It's how the game has evolved. You've got coaches willing to throw the ball more than ever, and you've got receivers who are the best athletes on the field. Why wouldn't a coach want to use them?"

Two of the NFL's most significant single-season passing records fell in 2013.

Denver Broncos quarterback Peyton Manning set the NFL's single-season passing-yard record with 5,477 yards, surpassing Drew Brees' mark of 5,476 yards in 2011, and finished the regular season with 55 touchdown passes, also the most in a season in NFL history.

As NFL football has evolved, the sophistication and importance of the passing game have grown consistently. Defenders have grown stronger and faster while defensive coordinators have become more creative. Moving the ball downfield three yards at a time via the run has grown increasingly difficult.

This trend has helped allow the growing number of star NFL quarterbacks -- ranging from established veterans like Brees and Manning to promising youngsters like Nick Foles and Russell Wilson -- to fully showcase their passing talents.

"Everybody feeds off of what the quarterback can and cannot do," says ESPN analyst and Pro Football Hall of Fame quarterback Steve Young. "Defensively, offensively, everybody reacts to what threats or non-threats the quarterback has. Everything else is secondary."

A record-setting seven quarterbacks finished the year with a passer rating of 100 or better (five in 2009), while five quarterbacks had 30+ passing touchdowns, equaling the previous record (2010, 2011 and 2012).

The quarterbacks with 5,000+ passing yards:

The quarterbacks with 30+ touchdown passes:

The quarterbacks with a 100+ passer rating:

A big reason for the success of NFL quarterbacks last season was the consistent performance of the starters.

The seasons in which the highest percentage of NFL teams started the same quarterback in every game: