NFL 2014: Relying on the Spread Offense 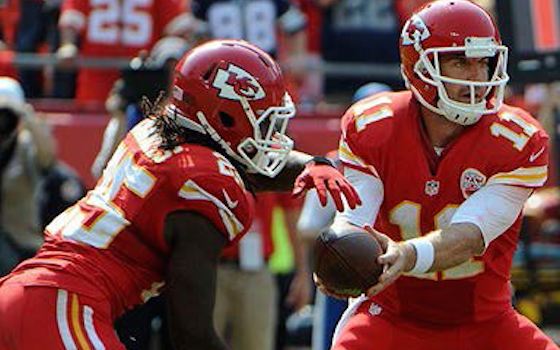 NFL 2014: Relying on the Spread Offense

Over the past few seasons, more and more NFL teams are running a variation of the spread offense.

The spread offense is lined up almost exclusively in the shotgun formation with either one or no running backs and four or five receivers. Players shift and go into motion prior to the snap on almost every play. The base play is a "zone read" in which, after reading the defense, the quarterback can either hand off to the tailback on a counter or keep it himself. The unique scheme mixes spread passing -- with an emphasis on short, high-percentage throws -- and old-school option football, including a modernized "triple-option" play in which the quarterback runs along the line and either pitches to the motion receiver or tosses a forward shovel pass to the tailback or another receiver.

Last season, Kansas City Chiefs quarterback Alex Smith operated out of the spread and in the pistol formation at times, where the quarterback is in shotgun with the running back behind him. Smith led a Chiefs offense that featured a few similarities from his collegiate days at Utah.

"The pistol is a unique formation," says Smith. "You're able to do a pro-style run game as well as some more spread, spread-option type things from the pistol. That's kind of the nature of it. You can run power and pro-style run games, as well as the advantage of being in the gun."

"You go back and evaluate everything and look at things and where the game is today," says Reid. "It's a blend. Football continues to change. It's all part of it. There are certain things that you hold strong to and there are other things that might be a little bit better that you learn from."

"It is another way to put pressure on the defense," says Roman. "It can force a defense to play certain ways that they might not play. That is what we are trying to do. Colin obviously has some background in it and he is a unique and rare athlete. Any time you have a rare athlete you are going to want to have that athlete impact the game any way that you can."

Stanford University head coach David Shaw, who spent nine seasons as an NFL assistant with the Philadelphia Eagles, Oakland Raiders and Ravens, believes that a spread offense used more frequently in college football can work in the NFL.

"Everybody from top to bottom -- the GM, the owner, the personnel people -- need to be on a mission to give that offense what it needs," says Shaw. "You can't waver from it. Everybody needs to be on the same page. It can't be, 'Well, let's bring this receiver in.' If he doesn't fit their offense, they can't bring him in. It's so different than what most people are used to."

"I think it could be the future," says Manuel. "I think teams have tried it but it's been battle-proven now. I don't think it's a fad. I think it's the kind of quarterback you're starting to see in the NFL now. I think it just puts defenses on their toes. They can't just drop seven defenders. If they drop seven and only rush four, it opens lanes and you can rush for 15 yards. So it kind of bends and breaks the back of a defense."

"I love it," adds Washington head coach Jay Gruden. "It's part of football now. It's something that has a place in the National Football League."

While the spread offense is certainly gaining popularity, NFL defenses are strategizing to limit the production in 2014.

"Obviously, the spread is very effective and has been," says New York Giants head coach Tom Coughlin. "Now defensive coaches are into it and that's a good thing. The energy level on the defense has been perked up by what's happened."

NFL 2014 - Relying on the Spread Offense