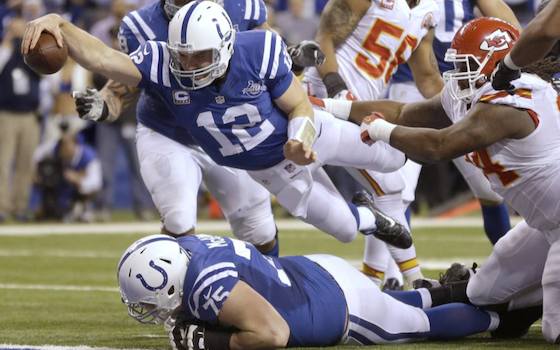 Last season, Indianapolis Colts Pro Bowl quarterback ANDREW LUCK passed for 3,822 yards and became the first player in NFL history to pass for at least 8,000 yards (8,196) in his first two seasons. In 2012, Luck passed for an NFL-rookie record 4,374 yards.

"Overall, he is everything as advertised when he came out of Stanford," says former NFL quarterback and CBS Sports' NFL Today analyst Boomer Esiason. "A can't miss player. If you ask any one of his teammates or coaches, he is the quintessential guy you want leading your franchise."

Luck, the No. 1 overall pick in the 2012 NFL Draft, is also no stranger to comebacks. Luck (10) has the most game-winning drives in the fourth quarter or overtime in the first two seasons of a career since the 1970 merger.

"He just wills this team to victory," says Colts head coach CHUCK PAGANO (right, with Luck). "He's unbelievable. He's able to stick to the process. It doesn't matter what the score is, what the situation is, the guy just finds a way to make plays, finds a way to get out of the pocket, finds a way to extend. Obviously the guys believe in him. We can jump on his shoulders, jump on his back. We're very, very fortunate that we have him."

The most game-winning drives in the fourth quarter or overtime in the first two seasons of a career since 1970: