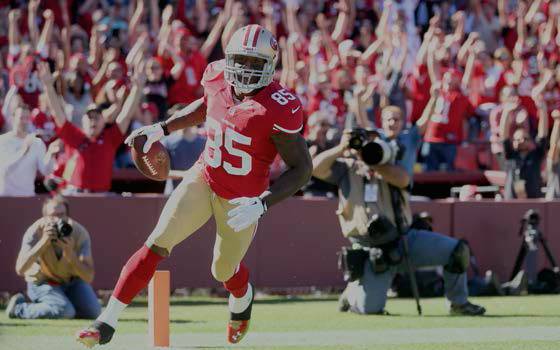 In today's NFL, more teams are factoring the tight end into the offense.

"I've never seen this many tight ends this good at one particular time," says Pro Football Hall of Famer Shannon Sharpe, one of eight tight ends enshrined in Canton. "We've never seen the position this dominant. This is the golden age of tight ends."

In a banner season for the position with standout performances by tight ends across the league, Jimmy Graham of New Orleans led the way. His 16 touchdown catches were the second-most in a single season by a tight end in NFL history (Rob Gronkowski, 17 in 2011).

San Francisco's VERNON DAVIS also posted 13 TD receptions in 2013, tied for the third-most ever in a season by a tight end.

NFL tight ends with the most touchdown receptions in a season:

"You look at the majority of the explosive pass plays on the field, it's because of tight-end representation," says ESPN analyst and former NFL quarterback Trent Dilfer. "Not because tight ends get them every play, but because of their influence on the field. It's the hardest riddle for the defense to answer, especially if you have two of them that can complement each other."

When an offense trots out a two-tight end, two-receiver personnel group, the defense must be ready for anything, particularly when one or both of the tight ends is a receiving threat.

"I think Kellen Winslow and Ozzie Newsome really revolutionized the position and now you're seeing more and more of these guys," says NBC analyst and former head coach Tony Dungy. "They're difficult to defend and I think you're going to continue to see more tight ends become big-time playmakers."