Now It's Your Turn, Redskins Owner 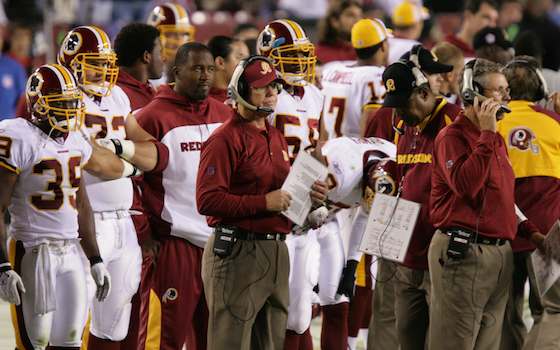 Now that the National Basketball Association has banned owner for life over his racist comments, how about those ?

Sterling is getting punished for insults that he uttered in private. owner insults Native American Indians in public every day that he refuses to change the team's name.

Snyder memorably rebuffed mounting pressure with a resounding declaration that he would "NEVER," all caps, change the team's name.

But now that Sterling has made himself so embarrassing that even his fellow team owners are hard pressed to defend him, Senate Majority Leader is encouraged.

Reid, a Nevada Democrat who says his state has 22 tribes, argued in a floor speech after Sterling's ban that the should treat racial slurs as seriously as the treated Sterling's racism. That means, Reid said, they should force the owner of professional football team to change its name.

"How long will the continue to do nothing, zero, as one of its teams bears a name that inflicts so much pain on Native Americans?" Reid said.

Good question. It's not like a name change can't be done, as basketball fans know. When the "Bullets" sounded inappropriate for the pro basketball team in a city suffering through an epidemic of gun-related homicides, the late in 1997 changed the team's name to the "."

Aside from scattered objections from some critics who complained that the name reminded them of Ku Klux Klan (you can't please everybody), the name change stuck.

Emotions do run high over such issues. It took some 25 years of arguments before , for example, finally changed their team name to the Redhawks in the late 1990s after more than a century as the .

Like the or , -related team names hark back to earlier cultural times in America. But that doesn't excuse the continued use of , an indisputably vulgar racial slur. It only shows how some people win respect in the world of pro sports more easily than others do.

That's the question at heart in the new name dispute. Who gets respect?

African-Americans and our allies can celebrate the swift, strong and decisive response by the to Sterling's comments that were leaked to the TMZ celebrity news site. It was strange indeed to hear Sterling, an team owner, telling his mixed-race girlfriend to avoid being seen in public with "black people" in this day and age. But it would have been even weirder for the predominantly black to respond with anything less than full respect for its black players after Sterlings' insults.

The same would be true in the , I am certain, if an owner wanted to call his team, say, the "Newark Negroes." The league would be loony to risk the walkout, not only by players, but also by fans that undoubtedly would follow.

Yet that, in effect, is the signal that the name sends to this country's Native People with its name. The irony is in the lame defense offered by Snyder and others who insist they actually are paying tribute to Native Americans. There is no lower insult to any group than to insist that you know better than they do as to when and why they should feel insulted -- or not.

If the was two-thirds Native American instead of two-thirds black, we wouldn't be having the same conversation. But it is a sad, cynical reality of today's racial etiquette that respect goes to those who have not just sympathies but numbers, money, votes or some other leverage with which to wield real power.

Still, I am optimistic that "Redskins" and similar vulgarities are on their way out. It is only a matter of how long public attitudes and generational viewpoints change to where even Snyder's players, fans or fellow owners think it's time to give this R-word a rest.