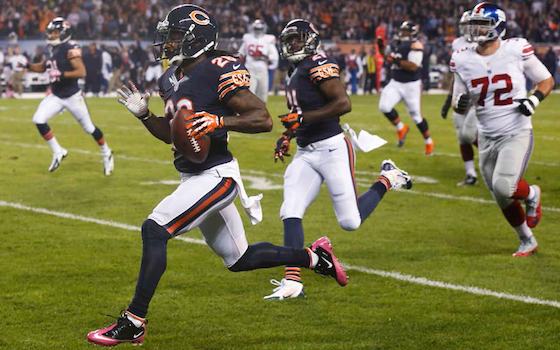 The Chicago Bears and Kansas City Chiefs tied for the league lead with five INT-TDs in 2013. It marked the second consecutive year the Bears led or tied for the most INT-TDs in the league. Chiefs safety Eric Berry credited his defense's scoring success on the pressure his line was able to create along with great vision once the ball was intercepted.

"Interceptions are often set up by great pressure by the defensive line," says Berry, who tied for the league lead with two INT-TDs. "After you catch it, your offensive instincts click in. The defensive linemen always tell me to follow them when I get an interception, so that's what I try to do."

Chicago's Tim Jennings, who also had two INT-TDs in 2013, says his defense is always looking for the next opportunity to make a play that impacts the game.

Most Players To Record INT-Return TD since 1970: