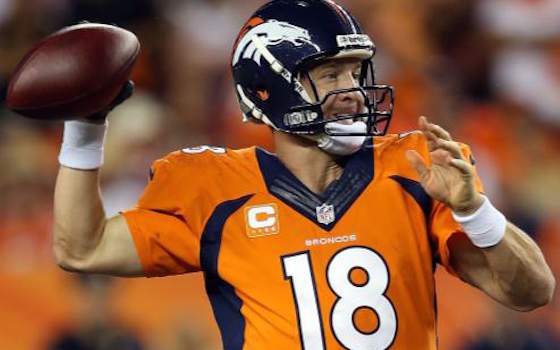 Denver Broncos quarterback Peyton Manning ranks among the NFL elite and continues to etch his name in the NFL record book.

Last season, Manning was named the NFL's Most Valuable Player and the NFL's Offensive Player of the Year by The Associated Press. Manning earned MVP honors for an unprecedented fifth time. The 13-time All-Pro quarterback led the Broncos to Super Bowl XLVIII while setting NFL single-season records in passing yards (5,477) and touchdowns (55) in 2013.

"He had a tremendous year and I think that's due to the type of person he is," says Pro Football Hall of Fame quarterback John Elway, who serves as the Broncos EVP of football operations and general manager. "It's a tribute to the offense and the whole team -- he'll be the first one to tell you his teammates allowed him to get done what he got done last year. It really was a tremendous year to watch."

Manning (13) also owns the record for the most 4,000-yard passing seasons in NFL history.

Manning's success has been attributed to his preparation, focus, dedication, durability and passion for the game of football. Former Indianapolis Colts head coach and NBC Sports analyst Tony Dungy spent seven years (2002-08) with Manning in Indianapolis and has been a witness to the five-time MVP's formula for success.

"He just goes way beyond what the normal person would," says Dungy. "He's chasing perfection." Manning, who is entering his 17th NFL season, ranks second all-time in career passing yards (64,964) and second in completions (5,532) and touchdown passes (491). Manning needs 18 touchdown passes in 2014 to surpass Brett Favre (508) for the most career touchdown passes all-time.