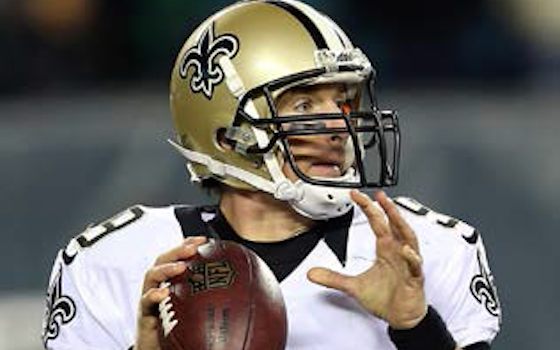 New Orleans Saints quarterback Drew Brees passed for 5,162 yards and 39 touchdowns last season as he earned his eighth career Pro Bowl selection. He completed 446 of 650 passes (68.6 percent) and had a 104.7 passer rating as he led the Saints to an 11-5 record and a playoff berth.

"I obviously take a lot of pride in what I do on the football field, because that has the ability to influence a lot of people," says Brees. "That puts smiles on people's faces. That gives people a pep in their step on Monday morning when they go back to work. That does so much for the city. We have the greatest fans in the world. There's no doubt about that. Each and every day I think about what can I do to make my team and my city better. That's my mentality."

Of the top five individual passing yard seasons in league history, Brees owns three of them. He also has four of the top seven passing-yardage seasons in the NFL record book.

Over the past four seasons, Brees has passed for 20,435 yards and is the only player in NFL history to pass for at least 20,000 yards in a four-year span.

With 39 passing touchdowns last year, Brees recorded his sixth consecutive season with 30+ touchdown passes. That is the longest streak in NFL history, surpassing the mark (five) set by Brett Favre (1994-98 with Green Bay).

"I love this game and I want to play it for as long as I can," says Brees. "When all is said and done, we can look back and talk about records, but for now, it's about winning. It's about trying to find a way to win a championship. I want to be the best decision maker I can be, the most efficient quarterback that I can be and the best leader that I can be."