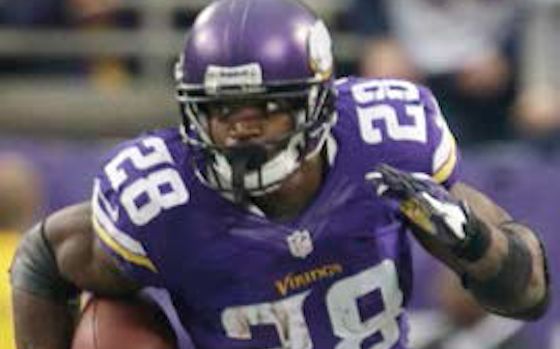 Minnesota Vikings running back Adrian Peterson rushed for 1,266 yards and 10 touchdowns last season. He has rushed for at least 10 touchdowns in all seven of his NFL seasons and joined Pro Football Hall of Famer Emmitt Smith (8) and La Dainian Tomlinson (9) as the only players in league history with at least seven such seasons.

Most Seasons With 10+ Rush TDs:

Tomlinson (nine) and Peterson (seven) are the only two players in NFL history to have 10+ rushing touchdowns in each of their first seven seasons to begin a career.

"There aren't many like him," says Smith, the NFL's all-time leading rusher, about Peterson. "He is a guy that has the inside running ability, the outside running ability and the breakaway speed. Plus the sheer brute strength when he needs it. And he's tough."

In his career, Peterson has rushed for 10,115 yards. Last year, he reached 10,000 career rushing yards in his 101st game, becoming the third-fastest player in NFL history to accomplish the feat.