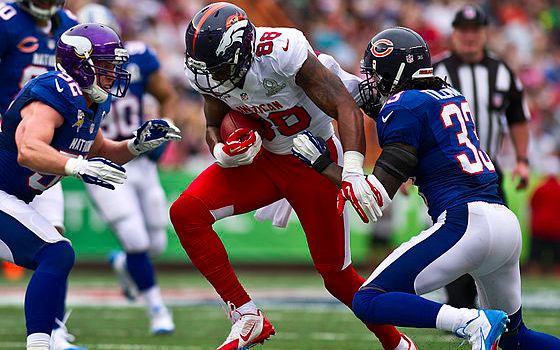 "It's great, a quarterback's best friend," says Kansas City Chiefs quarterback Alex Smith. "You love those extra yards. You need that in a passing game here and there."

Last season, Kansas City running back Jamaal Charles was tied for second in the NFL in yards after the catch (672) and led all running backs in the league with 693 receiving yards and seven touchdowns.

"He's versatile and the guy's a threat to score from anywhere," says Indianapolis Colts head coach Chuck Pagano about Charles. "All it takes is one breakdown after the catch, one wrong fit and he's gone."

"He's got great speed, he gets the ball in his hands and he's got a good feel for reading those blocks, which I think is a gift," says Broncos quarterback Peyton Manning about Thomas. "He gets it in his hands with speed and power and it's fun to watch."

The NFL players with the most yards after the catch in 2013: