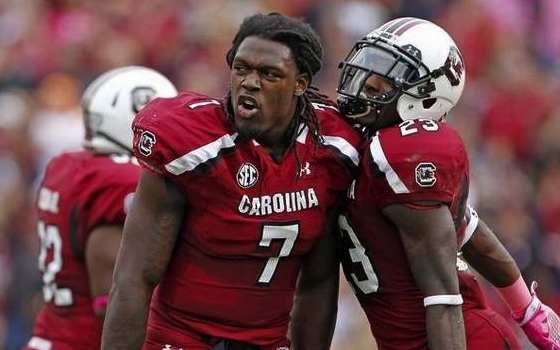 South Carolina defensive end Jadeveon Clowney announced that he will skip his senior season and enter the NFL Draft.

Clowney made the announcement minutes after the No. 9 Gamecocks defeated No. 19 Wisconsin, 34-24, in the Capital One Bowl.

"Yes, sir," Clowney replied to both questions when asked if this was his last season and if he was declaring for the NFL draft.

According to several draft analysts, Clowney is a favorite to be the top overall pick in the coming draft.

The 6-foot-6, 274-pound Clowney recorded a team-record 13.5 sacks and 23.5 tackles for loss as a sophomore. He earned unanimous All-America honors and finished sixth in Heisman Trophy voting.

After deciding to return for his junior season, Clowney overcame some early speed bumps and earned first-team All-SEC honors.

He entered Wednesday's bowl game with three sacks and 36 tackles this season and 24 sacks and 127 tackles for his college career.

Against Wisconsin, Clowney was credited with a season-high tying five tackles, including a tackle for loss as well as two breakups and a quarterback hurry.